Slated to open in September, CicciaBella 2.0 will be part of a $2.7 billion precinct in Parramatta — and is the restaurateur's first venture in Sydney's west. 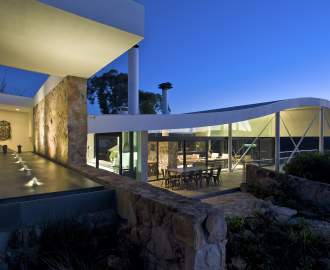 Sydney's eastern suburbs are not without a few fun-loving Italian spots by way of Maurice Terzini. There's Bondi institution Icebergs Bar & Dining, which the restaurateur has overseen since 2002, Bondi Beach Public Bar and Mitch Orr-helmed trattoria CicciaBella. Closer to the city, Terzini took over Surry Hills pub The Dolphin back in 2016, which last year housed world-famous bartender Matt Whiley's Scout pop-up. Now, the restaurateur is heading to Sydney's west for the first time and opening CicciaBella 2.0 within $2.7 billion precinct Parramatta Square.

Slated to open in September, CicciaBella's second outpost is a collaboration with Walker Corporation — the group behind Parramatta Square — and, more specifically, Lang Walker. While the billionaire developer and Terzini seem an unlikely pair, they've, in fact, worked together in the past, when Terzini first moved up from Melbourne and, with Walker's investment, opened Woolloomooloo's Otto.

"I had a feeling that the east was a bit saturated and I had been looking out west," Terzini told Concrete Playground. "When [the Walker family] presented me the development they had been working at Parramatta Square, it was pretty much a no brainer."

The announcement of CicciaBella 2.0 doesn't come singularly, though — there have also been some big changes at the OG. Orr has left (and is currently a self-proclaimed 'lady of leisure') and Nic Wong (The Apollo and Cho Cho San) is now heading up the kitchen, with a new menu focused on cucina povera — rustic-style peasant food — and woodfired dishes, rather than pasta. This new food angle will be carried over to the Parramatta restaurant, too. In the west, expect cheese, charcuterie and antipasti for starters, followed by the likes of whole sardines, roast peppers and a one-kilogram bistecca alla Fiorentina. At its heart, the Parramatta location will embody the trattorias of southern Italian cities like Milan, but it'll also be a bakery and salumeria — as Terzini describes it, "an Italian cultural journey explained through a number of different concepts...all the things that influenced me during my time in Italy".

For wine, expect a fun-yet-thoughtful wine list by Terzini's right-hand man, James Hird. If the Bondi list is anything to go by, expect a bunch of Italian varieties, all produced organically, with both Italian and Australian drops on the list.

Even the space will echo the Bondi restaurant, from the fit-out to the tunes playing. The interior, by Melbourne designer Fiona Lynch, will house a much larger bar than the OG digs, but the restaurant space will be about the same. There'll be art installations, too, and Carly Roberts (Founder of Picnic Touring & Events) will be pulling together playlists — think disco, dub, post punk and Balearic gems — as she already does for Bondi.

Terzini's restaurant empire expansion doesn't stop with Parramatta, either. Although the new trattoria is a big move for Terzini, it's not the only opening on his plate, with a 100-percent sustainable bar, a salumeria for CicciaBella, a new American-inspired bar with Matt Whiley and a 24-hour club all in the works. Oh, and he's got his eyes set on establishing dining destinations in Asia, too.

CicciaBella's second outpost is slated to open in Parramatta Square in September.

Published on June 23, 2020 by Cordelia Williamson