The location is six times the size and the pizza is the best it has ever been.

Dimitri's Pizzeria and its eye-catching red-and-white sign have been a permanent fixture on Crown Street since the 70s; while it moved once (around 20 years ago), it's never left the strip — until now. The Surry Hills pizza stalwart has uprooted its tables (literally) and relocated to Oxford Street, where it's setting up shop in the building previously home to Hunky Dory Social Club. And it plans to occupy all three of its levels — meaning the pizzeria is about to grow six times in size.

On the ground floor, it'll be the pretty much the same old Dimitri's, but bigger and better. Owners Ken Williams and Drew Huston have finally gotten their hands on a woodfired pizza oven and are making the type of pizza they've been wanting to do for "a long time". "It's a massive improvement on the pizza we were serving before," says Williams. And Huston agrees: "We're cooking our ideal pizza right now, I reckon — safe to say, we're pretty psyched about it." 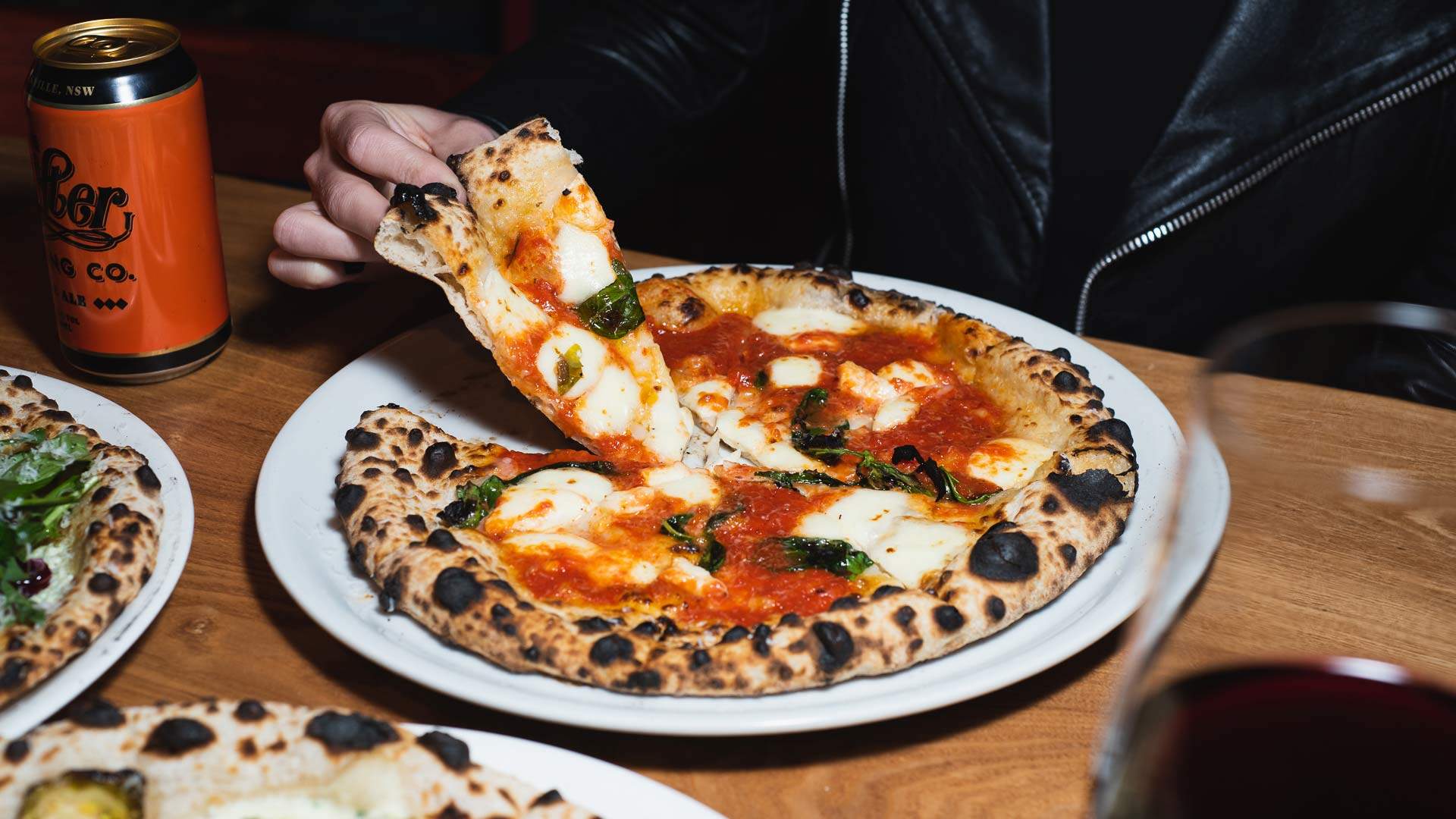 The woodfired oven can get up to 150 degrees hotter than the restaurant's previous oven (meaning the pizzas only have to spend a third of the time inside) and the pair is also making a new 100-percent sourdough base that is fermented for much longer — a minimum of 48 hours. What does all this mean for you? The dough is lighter, easier to digest and a whole lot tastier (and the pizzas will land on your table much quicker).

The dough is similar to that of Neapolitan-style pizzas, but Williams is quick to point out that their pizzas are not 'traditional' Neapolitan — "it's like neo-Neapolitan, but some chefs hate that term". And while the dough itself is fairly traditional — despite its use of a blend of Australian organic stone-ground flour — the toppings certainly aren't. Expect to find brussels sprouts, honey (from Williams' mum's beehive), radicchio, rainbow chard and even corn atop the pies. As well as the necessary mozzarella, which is stretched daily in-house. The pair is planning to alter the toppings with the seasons, too, making the most of short-season produce like pine mushrooms and truffles.

You'll be eating all of this on the old Dimitri's tables — which have been repurposed by Williams' brother Lex, a furniture builder and designer — surrounded by exposed brick walls, art, fairy lights and the restaurant's namesake: a striking red neon Dimitri. "I asked a tattoo artist friend of mine [Sanchez from Oxford Street's Thanks Tattoo] to draw up a tattoo of a crazy pizza man," says Williams of the restaurant's illuminated mascot. "And that's the head of the crazy pizza man." This head is now located inside at the new Oxford Street venue, right next to the stairs, which will, by the end of spring, lead to the next two levels of Dimitri's.

With a total capacity of around 150 people, the top two levels will be home to "Dimitri's but in bar form", which means Grifter beer on tap and all-natural wines — including the likes of Das Juice, Gut Oggau and Delinquente — and a short and sharp cocktail list. Williams says to expect "really good quality drinks, a chilled atmosphere and good times". These good times will extend to the third-level open terrace, too, where you'll be able to drink looking out on the street below. And on the rooftop — yes, it keeps going — there'll be a garden, where Williams will be growing herbs and some veggies for super-fresh pizza toppings.

It's a big job — especially when the owners are doing all the handiwork themselves. "Pretty much everything you see is hand built," explains Williams. "Which is definitely keeping us busy." This means when the first level of Dimitri's opens in early July, it'll only be firing pizza four days a week, giving the team three days to work on the rest of the building.

In the meantime, keep an eye on Oxford Street for the glowing red sign — it's turning on tonight.

Find Dimitri's at 215 Oxford Street, Darlinghurst. It's currently open on Wednesday, Friday and Saturday nights, with bookings available via Instagram message — though, keep an eye on its social media for opening hour updates.

The bars on level two and three are expected to open before summer.