You can 'pimp your pizza' with caviar and truffle at this new Potts Point eatery from the Monopole crew.

The duo behind some of Sydney's fine-dining greats tried its hand at something new in 2020: pizza. Yep, Brent Savage and Nick Hildebrandt, whose restaurants include Barangaroo's seafood-focused Cirrus Dining, award-winning Bentley and wine bar Monopole, put down the tweezers and picked up a pizza peel for their latest culinary trick.

Called Ria Pizza + Wine, the new restaurant opened inside Monopole's old Potts Point digs in the final days of 2020, while the eight-year-old wine bar relocated to Hunter Street in the CBD. Moments after the wine bar moved out, lauded designer Pascale Gomes-McNabb moved in to refit her own fit-out — with the help of artist Ash Keating, whose known for his large-scale works created using paint-filled fire extinguishers. And, like Gomes-McNabb says herself, walking into Ria is a little like walking into one of Keating's paintings.

Three neon wine bottles welcome you at the door and neon rope lights by Satelight Design lead you into the restaurant, which has bright splatters of pink, purple, orange and blue paint covering its walls and a wind chime-like sculpture hanging from the ceiling. 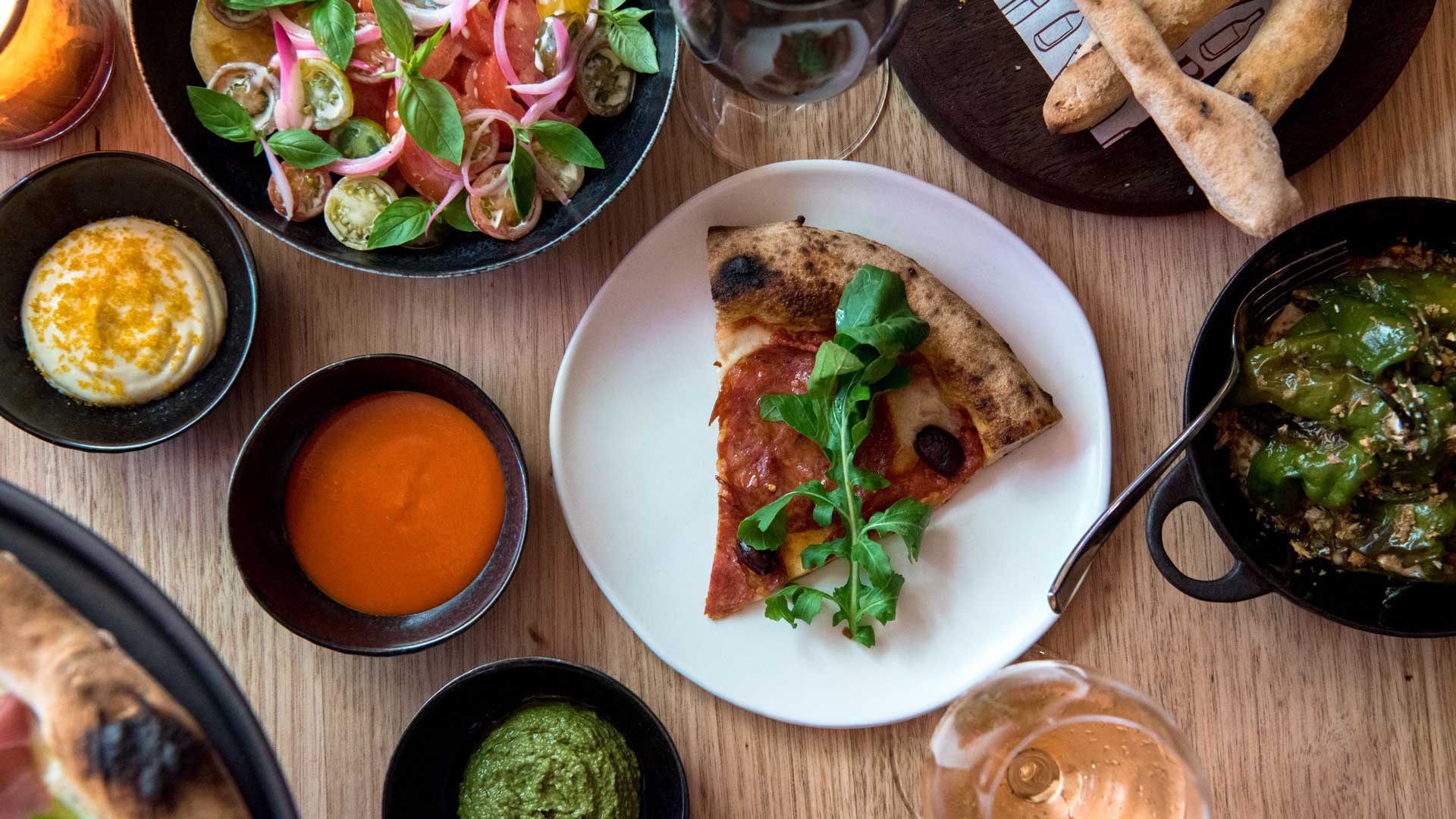 You can pull up a stool at the wooden bar or settle into a banquette, then get acquainted with the menu. The focus is the pizza, of course, which comes in eight frequently changing toppings. Before it even arrives at your table — and you're able to inspect the base — it's evident the pizza here is not traditional Italian or American. Rounds come topped with the likes of saltbush, northern Queensland prawns and XO ($31); WA octopus, 'nduja and green chilli salsa ($29); and zucchini, pepita seed pesto and feta ($26).

It's, as Savage describes, "Australian" style pizza, but the bases skew towards Roman-style: crisp, sourdough and on the thinner side, with a little bit of chew.

In true Savage and Hildebrandt style, there's a bit of luxury hidden on the menu, too. You can 'pimp your pizza' with the likes of white truffle (one gram for $13), beluga caviar ($180 for 30 grams) or Ortiz anchovies ($20 for 47.5 gram). You can also spice your pizza (for slightly cheaper) with the restaurant's house hot sauce made with yuzukoshu and smoked pepper

As you'd also expect from Hildebrandt, the wine list isn't short — but it's significantly shorter than its Monopole predecessor (which had upwards of 500 bottles). Here, you'll find perfect pizza drinking drops with numbers from cult Italian natural wine producer Radikon, SA favourite Unico Zelo and coveted amber wines from Gravner. There's a lineup of local and international craft beers available, too, including numbers from Yulli's Brews, Ballistic and Stockade.