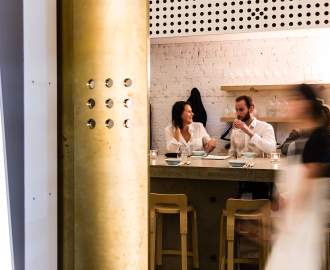 The Best Japanese Restaurants in Sydney

In Sydney, Andy Bowdy's cakes are legendary. But until now, tasting one of them has been relegated to attending a very involved birthday party or some kind of fancy event. The opening of his first standalone cafe Saga presents the first opportunity for the average punter to just walk in a grab one of the baker's lauded sweet creations since he finished up as pastry chef at Hartsyard. About time.

What sets his famed meringue-heaped, caramel-dripping tiered cakes — served at Saga as mini versions, perfect for one person — apart is that they're all about reversing the ratio of cake to cream; instead of thick layers of dense sponge, each delicacy is carefully dressed with fat deposits of melt-in-your-mouth cream that, at first, may make you feel a little guilty. But then the overwhelming calm washes over your sugar-filled brain as you realise you don't care one little bit.

But Saga isn't just about Bowdy's confectionary. The broader menu is brief but varied, allowing for a good range of choices when it comes to the savoury flavours, as well as a few vegetarian options.

The brunch menu puts a decadent twist on a number of breakfast classics, like the Anzac granola with scorched pear, yoghurt, honey and rosemary ($14). To really push the boat out, though, dig into the breakfast rice. Each grain is deliciously toasty, with Bowdy's philosophy of less carb, more sauce taking over with a liberal helping of a tasty Romesco that's pleasingly not too heavy-handed with the heat. The dish comes with hefty serves of mild chorizo and strips of crispy bacon scattered throughout the rice, and a perfect fried egg on top. The blend of texture and flavours brings the dish to life, and goes to show that Bowdy is just as comfortable with savoury foods as he is with dessert.

The lunch portion of the menu is made up of a short but sweet selection of sandwiches that manage to represent all the major meat groups with enough room left over to squeeze in the vegetarian Alex B — a sambo made with maize and herb-crusted eggplant parmigiana, parmesan custard, passata, basil and mozzarella ($16). The rest take their inspiration from the classic New York deli-style, none moreso than the king of meat sandwiches, the Llewellyn. Stuffed inside a fresh cut of seeded bread, you'll find a literal smorgasbord of cold cuts mingling with some crunchy shredded lettuce and a peck of pickled peppers. Once again, the flavour of the sopressa, mortadella, smoked ham, prosciutto, and coppa (a traditional Italian pork cold cut) meeting the bite and acidity of the peppers is incredible, but it's the textural cacophony that really lifts the simple sandwich off the plate.

The coffee by Artificer is spot on, and Bowdy's partner Maddison Howes has also crafted a concise but comprehensive list of beverages, covering both the normal and the adult kind, including Campari and fresh OJ ($14) or a fetching nectarine and prosecco bellini ($14).

The cafe takes a minimalist approach to design — which is just as well, considering that space is pretty thin on the ground. As such, it can get pretty busy, so be sure to allow a little waiting time. Having said that, when you're staring down a tasty breakfast and one of Bowdy's decadent delicacies for dessert, life is bound to seem immediately sweeter.