You're hitting the road on tour and you're only playing the greatest hits. That's one fine way to do the South Island of New Zealand, a destination known for its jaw-on-the-floor scenery, geological wonders, and oh so many gateways to adventure.

Our tip? Start in the northwest corner of the island and drive clockwise. You'll hit every region — each with some miracle of landscape and gastronomy to call its own — see seven sublime sights, and emerge satisfied at the end. Best accessed by way of the ocean, Abel Tasman National Park's Split Apple Rock is a vision emerging from the deep. The natural enigma is the gateway to one of the country's most stunning national parks, surrounded by 237 kilometres of blue waters and golden sands. The granite rock sits 50 metres out into the bay, and as local legend has it, the spherical form was cut by two gods arguing over it. Geologists, meanwhile, believe that the rock was split like an apple during one of the country's ice ages. These days, it's a popular spot for sea kayaking and swimming. You can float right up to the rock and marvel in the nature and wildlife surrounding it. The awe-inspiring beauty is just a taste of the Abel Tasman, which can be walked, kayaked or sailed in however many days your wanderlust desires. A short drive inland from the abundance of beaches in Nelson, lies Lake Rotoiti, a gem in the region's second national park. The iconic view of the boat ramp, adored by local families and eels alike, stretches to the furthest reaches of the lake, and into the mountains in the distance. In winter, the snowy peaks reflect off the glassy surface. In summer, lush native bushland is a backdrop for children jumping into the water. Native birds can be spied in nearby bushes, with tracks circling the water's edge, and friendly Kiwis are never hard to find if you're looking to dabble in watersports. The money-maker? Watching the sun go down, and the sudden realisation that there's nothing but you and nature. It's captivating. 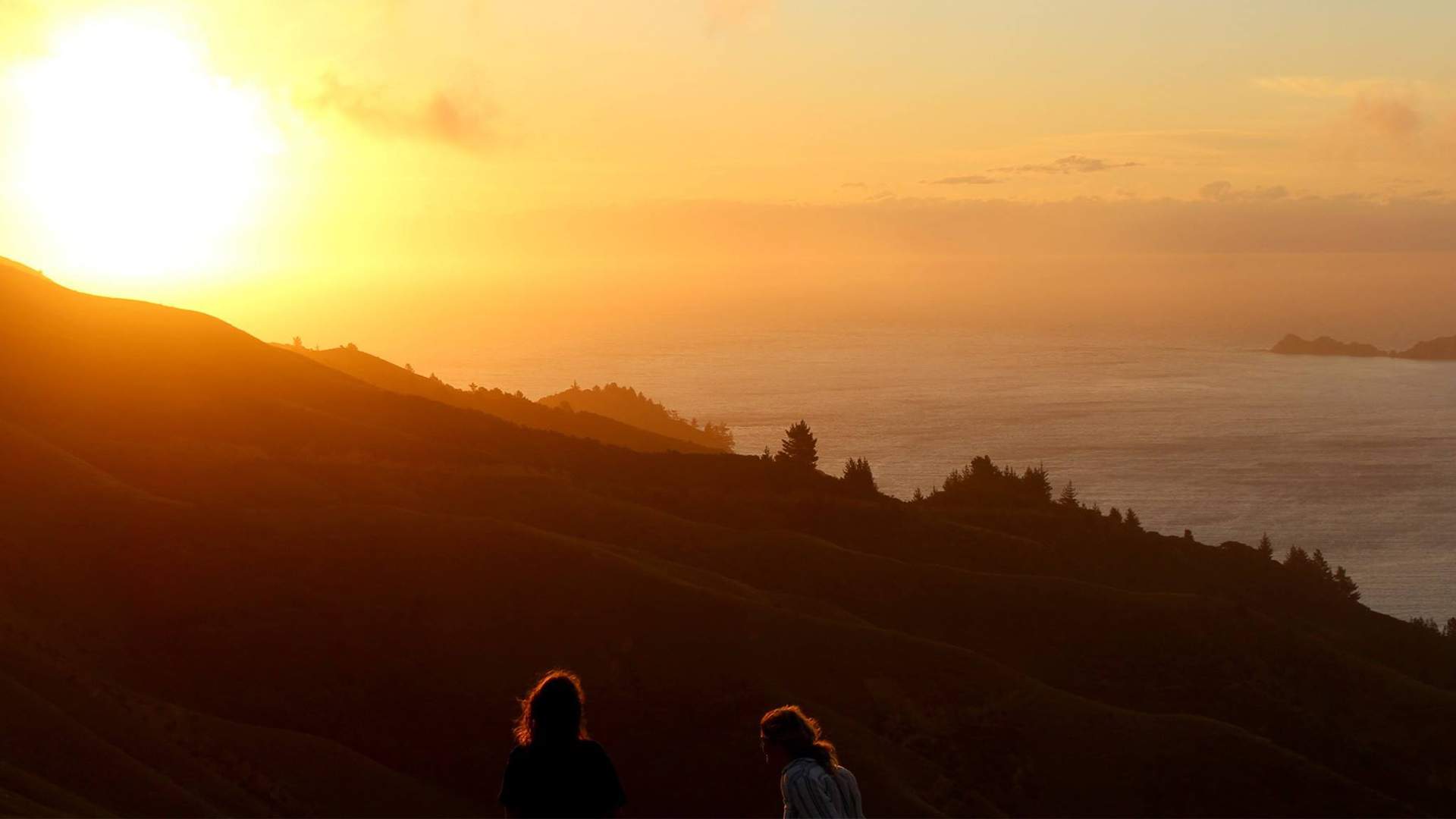 Chances are you have breezed through this beauty on a trip from the capital to head further south but have never taken advantage of the natural wonder at your fingertips. The Marlborough Sounds are an extensive network of sea-drowned valleys, mountains plummeting into the blue waters below. The calm waters are inhabited by dolphins, whales and friendly fish often caught by locals for food, and the sandy beaches are inhabited by laidback Kiwis and their baches that have passed through the generations. Queen Charlotte Sound is one of the largest channels in the network of bays and mountains and, like much of the country, can be enjoyed by boat or foot. The walking track is an easy route, showcasing some of the best sights all the way through to the capital, and can be done in three to five days. Pick of the bunch? Standing on the corner of the South Island, watching the sun rise over the North. 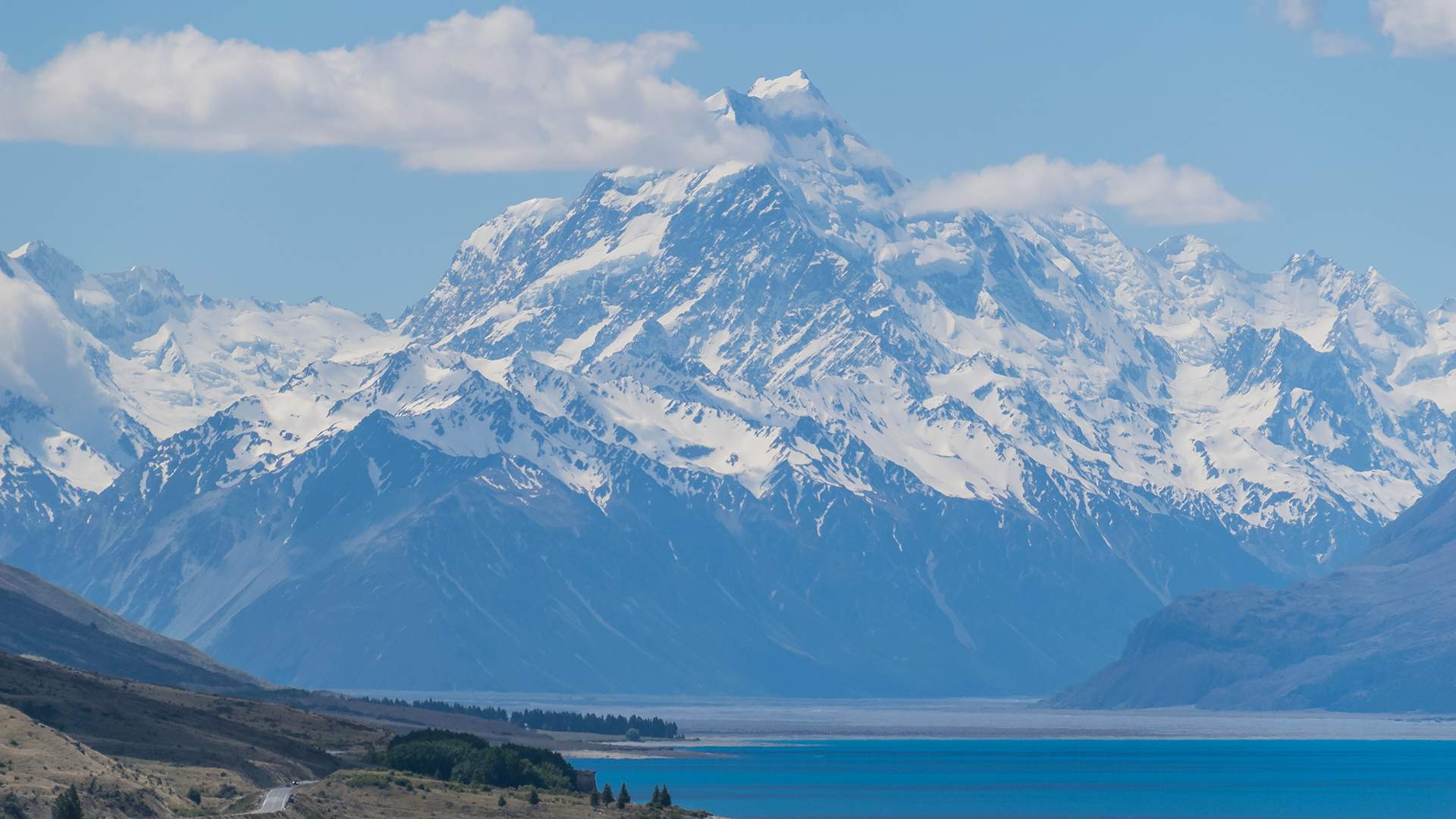 Aoraki/Mount Cook has a commanding presence, with a sharp peak and plummeting crevasses. The sheer sight is enough to keep you on edge, but the company of the mountain is oddly comforting. This is the tallest mountain in the country, standing 3,724 metres, and has an ability to render anyone speechless. Ngai Tahu, the main iwi of the region, consider Aoraki as the most sacred of the ancestors that they had descended from. The name is believed to mean cloud piercer. Ascending the steep peak is no easy feat and should be reserved for the most experienced climbers, or those safely tucked inside a helicopter. From Hooker Lake, south of the mountain, the modern explorer can indulge in the ever-inspiring lake and mountain duo. As you drive into the region, past the electric blue Lake Pukaki, and catch the first glimpse of the mountain in the background, you know you're in for a vision of a lifetime. 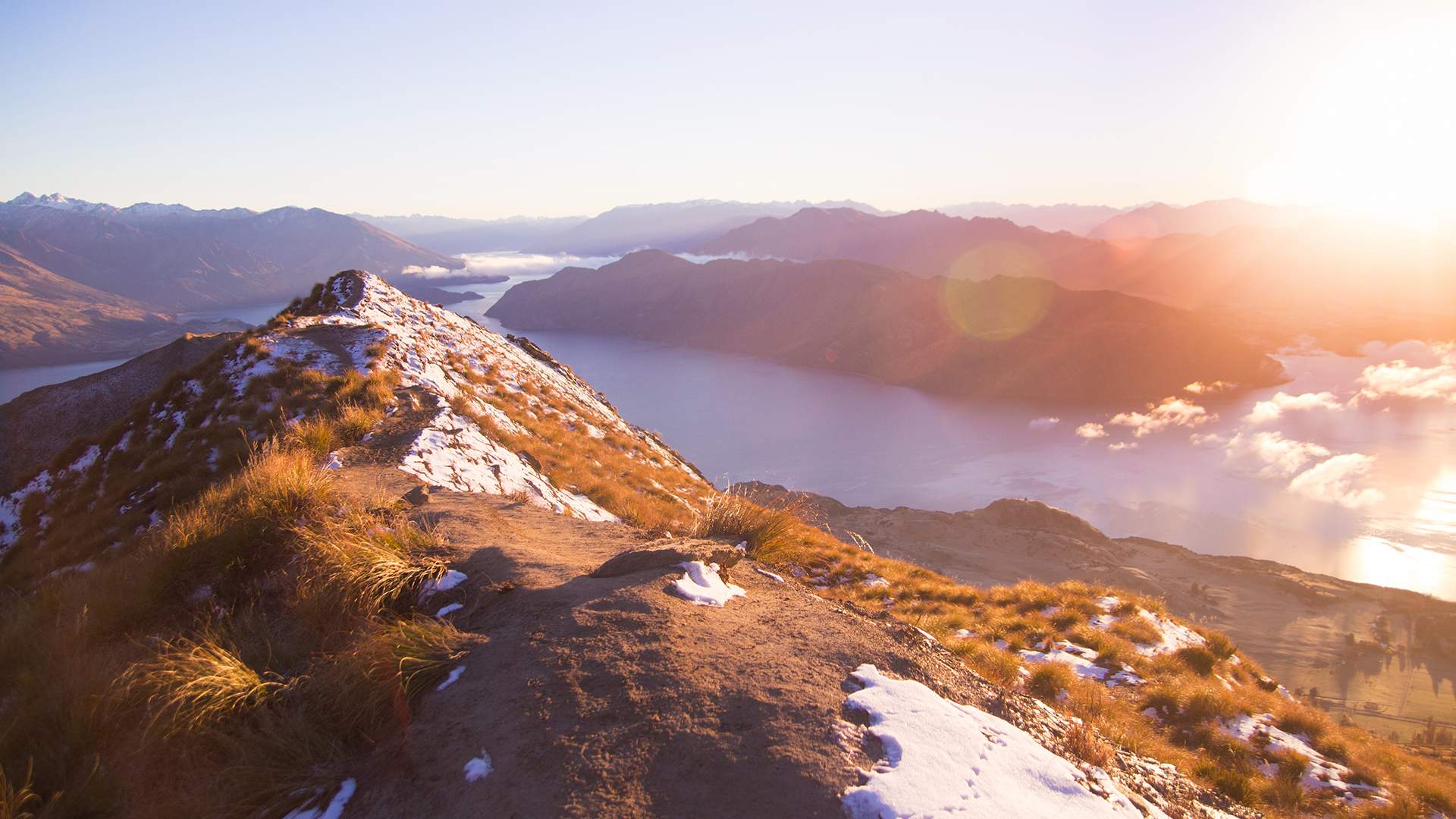 Prepare to put in the hard yards to make this Instagram a reality. The five-hour round trek to Roy's Peak has been known to test the fittest climbers, but the view from the top is comparable only to being on Pride Rock. It's overwhelming when you stand on the edge of something so big, with the furthest corners of the country in sight. Gazing over Lake Wanaka, you can spot that Wanaka Tree, and see to the peak of Mount Aspiring in the distance. Bonus: The steep ascent will help you condition your glutes. In a region rich with adventure tourism, from skiing to jetboating, skydiving to bungee jumping, the breath of fresh air at the summit of Roy's Peak is a moment of solace. Take it all in, pinch yourself, it's real. 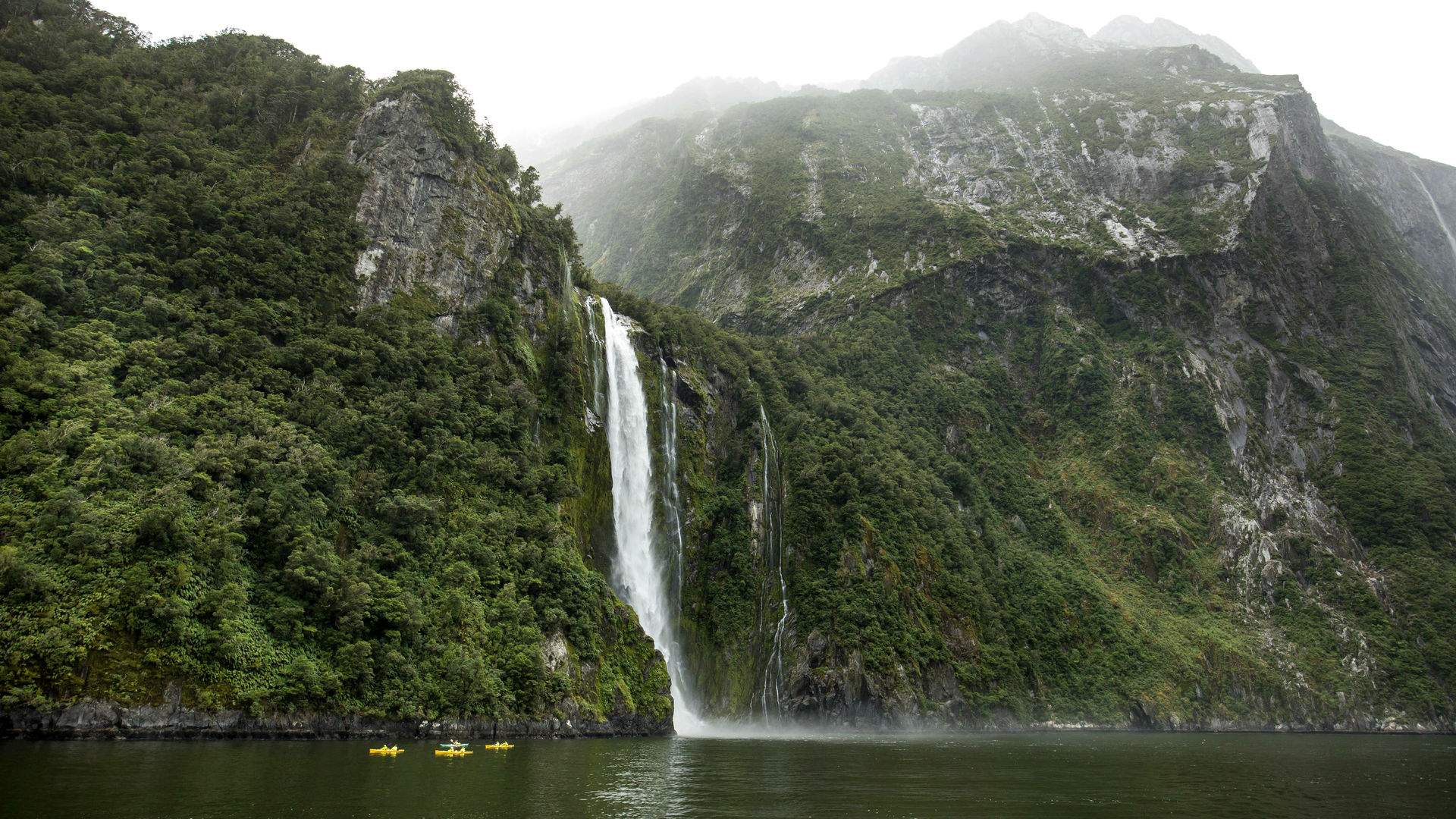 There's no sight more sobering than standing at the foot of some of the world's most remote peaks. Watching lonesome waterfalls fall into endless ocean. It's a sight that's so iconically New Zealand, so undeniably unmissable, and it's all waiting at Milford Sound. This south corner of the country can be explored by foot, discovered by air or taken in by boat venturing through the never-ending turns of the fiord. Buses to Queenstown are abundant, and water tours of Milford Sound depart frequently. Guides will direct you to graceful waterfalls and sharp peaks that can be snapped from afar and savoured forever. A sight slowly slipping from our grasps, nothing is more striking than the geological wonder that is Franz Josef Glacier. Standing at the base of the icy slopes gives you a real feeling of how vast this country is. There are rare rock formations, frozen rivers from centuries past, mountainous peaks to one side and a blue ocean to the other. It can be dumbfounding if you think too much. A one-hour hike will get you to the base of the glacier, but the best seat in the house is slightly further uphill. Almer Hut is one of the humblest abodes on the planet, though it sits atop dramatic snowy peaks and stark cliff faces. Visitors can enjoy a view down Franz Josef Glacier to the rugged West Coast beaches below. The hike is for experienced climbers, but many local companies offer heli-tours to the picture perfect palace.