Come What May: You Can Now Spend a Night in the Moulin Rouge's Iconic Windmill Thanks to Airbnb

Even better: your overnight stay in the Parisian windmill's secret room, which has never been opened to the public before, will only cost you AU$1.49.

Spectacular spectacular news: we've just found the best excuse you'll ever have to head to Paris, other than, well, just generally heading to Paris. Making movie-lovers' dreams come true, and just fans of the French capital's as well, Airbnb has listed quite the iconic spot. When it comes to the Moulin Rouge's famous windmill, no other word comes close to describing it.

You've seen it lighting up the big screen in Baz Luhrmann's Moulin Rouge!, spotted it as part of Moulin Rouge! The Musical's sets and, if you've been to Paris before, maybe even tangoed past it. Now, you can slumber in a secret room within the red-hued site. Yes, you'll be peeking behind the velvet curtains of the famed location — and walking through them.

The space inside the windmill has never before been opened to the public, let alone been made available to book via Airbnb — and yes, it's decked out to look the part. The interior has been turned into a Belle Époque-inspired boudoir, so you really will feel like you've danced back to late 19th-century France or into a film (or both). To get the details exactly right, Airbnb worked with French historian Jean-Claude Yon on the renovations, with authenticity obviously a big driving factor. 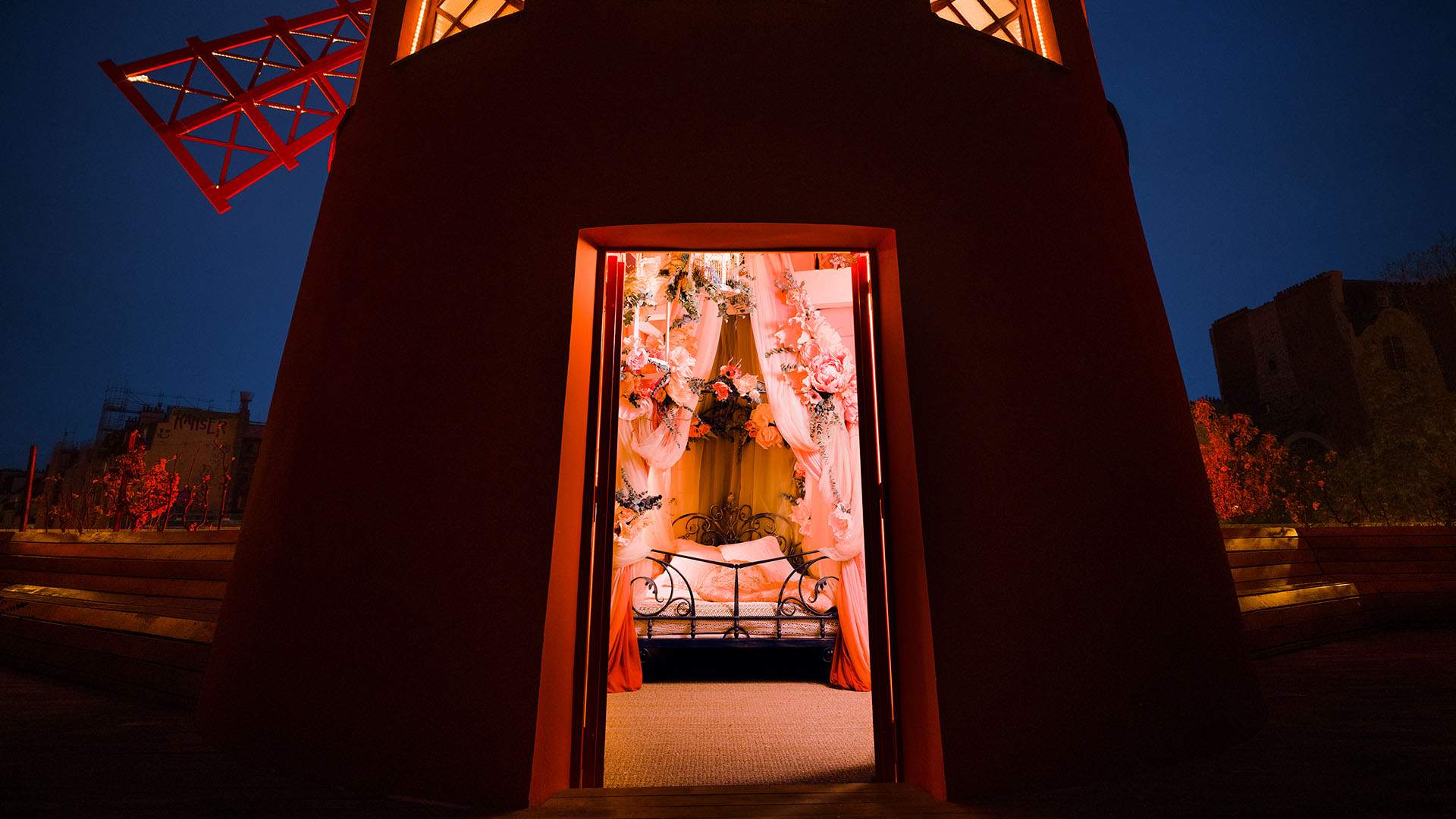 The results: that opulent boudoir, which comes filled with art nouveau features and a miniature paper stage; a dressing area filled with vintage costumes, perfumes and letters from admirers; and a private rooftop terrace with an ornate pagoda and garden furniture that would've been around at the time. Come what may, indeed.

That's all stunning as it is — and the fact that you'll get backstage access to the theatre, a traditional three-course French meal and the best seats in the house for the Moulin Rouge's acclaimed show Féerie as well as an overnight stay makes it even better. So does the fact that your host for the booking is Claudine Van Den Bergh, lead dancer of Féerie. ​ If you've tried to sleep in the Bluey house in Brisbane, or Dracula's castle in Transylvania — or shark tanks, van Gogh's bedroom and the Teenage Mutant Ninja Turtles' secret lair — then you'll know that getting into Airbnbs like this is more about entering to score a shot than booking, though. In this case, the Moulin Rouge windmill will only be hosting three individual one-night stays for two guests each on June 13, 20 and 27

To get your chance, you'll need to head to the windmill's Airbnb listing when reservations open — at 3am AEST on Wednesday, May 18. If you score a stay, that AU$1.49 / NZ$1.63 doesn't cover getting you to Paris, unsurprisingly. Accordingly, your bank account will still get a workout. And, if you've always wondered about the windmill's history — well, since seeing Nicole Kidman and Ewan McGregor fall in love on-screen near it — it was first constructed in 1889, to nod to the site's rural origins. Then, after a fire, it was reconstructed three decades later.

For more information about the Moulin Rouge windmill listing on Airbnb, or to apply to book at 3am AEST on Wednesday, May 18, head to the Airbnb website.