The Best Mountain Walks Near Sydney

Trek through ancient rainforest and burning mountains to stunning peaks, all within reach of Sydney.

Australia's most spectacular peaks aren't just restricted to its southeast corner. There are several summits worth surmounting in New South Wales, and heaps of them are located an easy drive from Sydney. Just 90 minutes' drive to the west lies the eucalyptus haze of the Blue Mountains, where mountain walks criss-cross with heritage trails and wilderness views. To the northwest, the Barrington Tops National Park affords lush vistas of the Hunter Valley on one side and Newcastle's sand dunes on the other. Then, to the south, three hours' drive brings you to the rugged terrain of the Budawangs. Here are the best places near Sydney to give you an altitude boost. Elinor Sheargold via Department of Planning, Industry and Environment

For dazzling views of the Grose Valley, heaps of troglodyte hideouts and wombat spotting, head to Mount Banks. The 2.5-kilometre return trail starts at the Mount Banks picnic area and begins with a short yet steep climb before ascending gradually to the summit. Most peaks in the Blue Mountains are sandstone, but this one still has its basalt covering — which was created by volcanoes 20-million years ago. Look out for unusual vegetation, including smooth-barked monkey gums. If you'd like to extend the hike, opt to link up with the Mount Banks Road cycle route, which will make the trek about five kilometres all up. 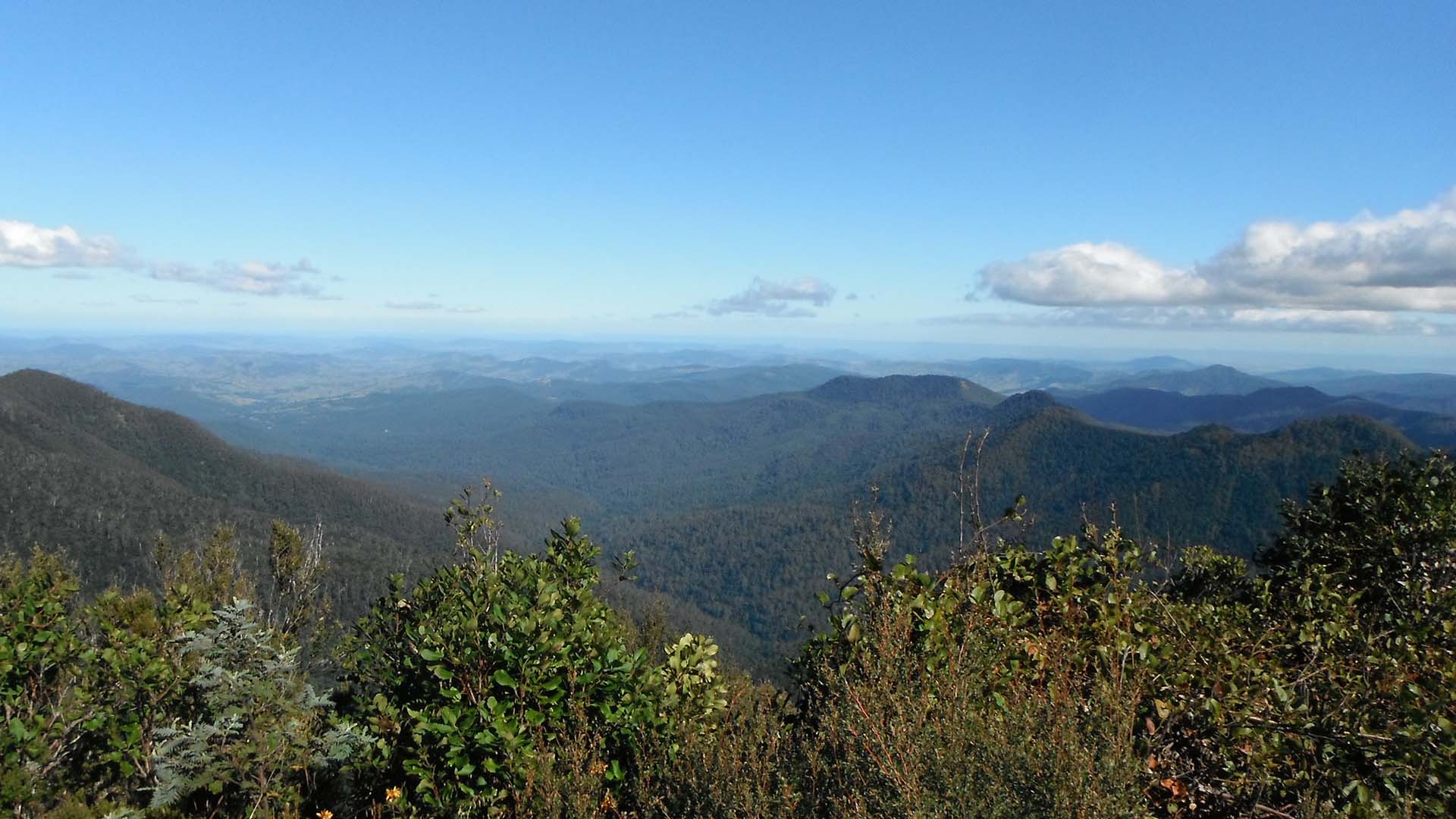 Peter Beard via Department of Planning, Industry and Environment

Set within the ancient Gondwana rainforests — a World Heritage site — Careys Peak takes you through some of the most scenic bits of Barrington Tops National Park. The 14-kilometre return walk begins at the Mount Barrington Picnic Area and travels through the Australian wilderness, parts of which will remind you of Lord of the Rings. Expect gnarled Antarctic beech trees dating back to ancient times, snow and mountain gums and a historic hut. From the peak, 1544 metres above sea level, soak up the pastoral glory of the Hunter Valley on one side and the Barrington wilderness on the other. Rachel-Ann Wilcher via Department of Planning, Industry and Environment

Strictly speaking, at 653 metres, Burning Mountain (aka Mount Wingen) is more a hill than a mountain — but the 'burning' part is spot on. Thirty metres underground, a coal seam has been on fire for around 5500 years. And, since the fire moves one metre every year, the landscape is continually changing. The hike itself is an accessible, four-kilometre loop which allows you to thoroughly explore this phenomenon and its impact on geology, animals and plants — from the smoke billowing out of the ground to the red gums growing along cracks in the earth. The Burning Mountain Nature Reserve is a 3.5-hour drive from Sydney, so we recommend staying overnight in a campsite or at accommodation in the nearby town of Scone. Situated in Wolgan Valley — which sits between Gardens of Stone National Park and Wollemi National Park — Donkey Mountain is a mind-blowing series of rock formations. Reaching its summit involves weaving your way through an adventurer's paradise — in and out of canyons, pagodas and caves splashed with rock orchids, ferns and natural vertical gardens. The trails are largely unmarked and difficult to navigate, so its best to come prepared with an experienced climber if possible. Either way, expect to get lost and enjoy the breathtaking scenery along the way. We recommend staying the night before at the nearby Newnes campground to make sure you have plenty of time to explore the region. 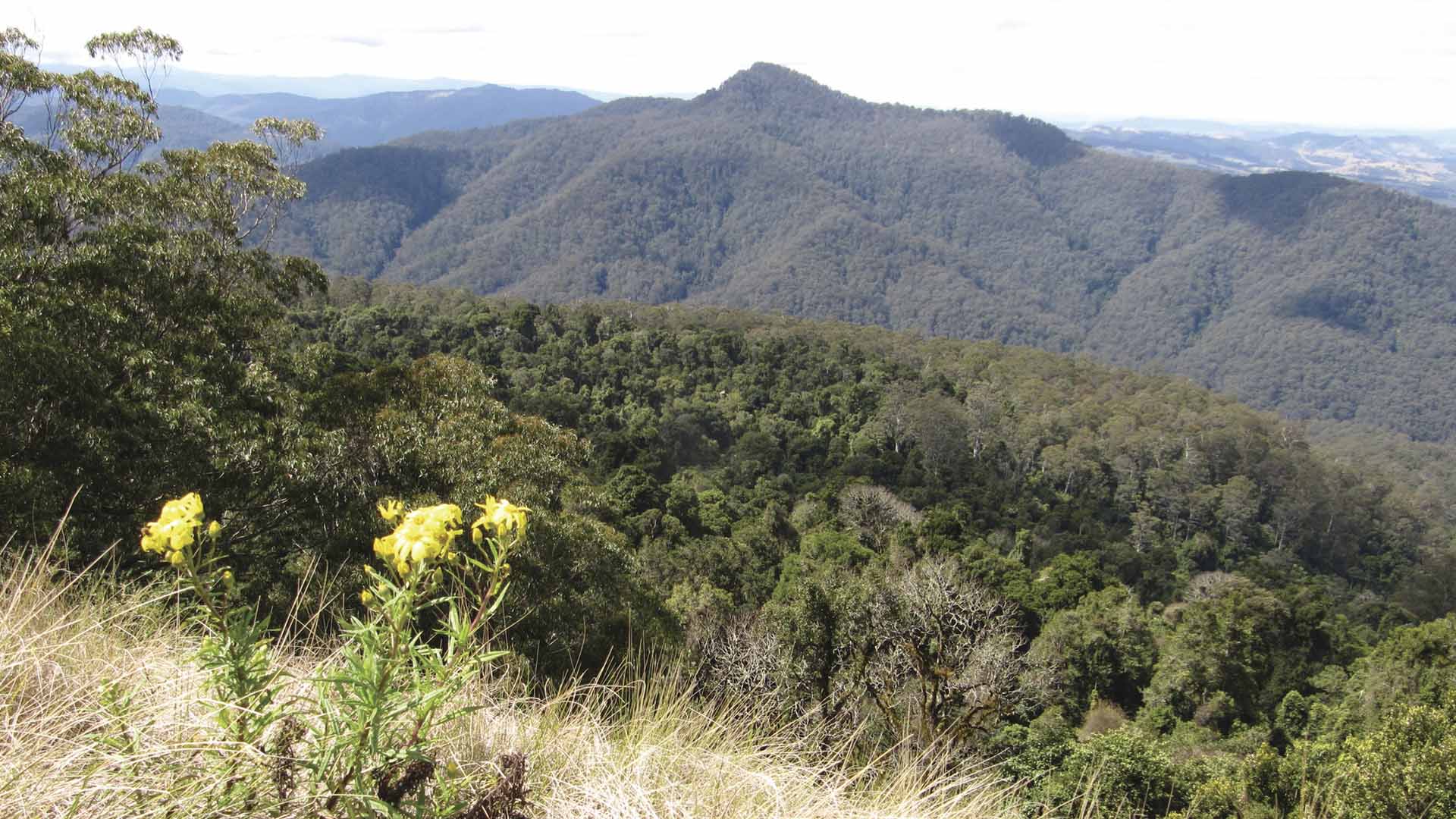 Susan Davis via Department of Planning, Industry and Environment

Don't let the three-kilometre return hike to Pieries Peak fool you — it may not be long, but its steep slopes make it a rather challenging, grade four trek. Starting at Youngville campground, the trail launches straight into action, climbing through rocky ridges, snow grass and rainforest. Keep your eyes peeled for lyrebirds, brush-turkeys, honeyeaters and flycatchers. Once you reach the top, you can kick back and enjoy stunning views across Hunter Valley and Lake Saint Clair. The peak gets quite cold in winter, so we recommend saving this one for the warmer months. In general, the region's weather is unpredictable, so be sure to come prepared for all scenarios. Michael Jarman via Department of Planning, Industry and Environment

The Budawangs are three hours' drive from Sydney, so if you can't cut an early start, head down the night before and pitch a tent by the river at Long Gully campground. It'll give you time to physically and mentally prep, because The Castle hike is a tough nut. Prepare for some rock scrambling at great heights. If you'd rather hike with a pro, you can book in a guided tour through Big Nature Adventures on the NSW National Parks website. Despite its difficulty, this hike is worth it — The Castle is hands down one of the best mountain walks in New South Wales, giving you amazing views over Morton National Park, the Byangee Walls and Pigeon House Mountain.

Much of Morton National Park was damaged during the devastating bushfires 2019/20 bushfires, check local alerts at the NSW National Parks website before heading off. Waterfalls abound on the Wentworth Pass walking trail. This grade four hike may be just a five-kilometre loop, but it'll take around four hours to complete. Located two hours from Sydney, the trek is a segment of the famed National Pass trail that is currently open to visitors. Along the way, you'll hike deep into the Valley of the Waters and through a whopping seven waterfalls — starting with Wentworth Falls. The lookout boasts views across the Jamison Valley to Mount Solitary. Be sure to pack your bathers and enjoy a dip in the falls' crystal clear pool. You'll then undertake one helluva steep climb, passing five more waterfalls along the way, finishing at the breathtaking Empress Falls lookout.

Published on November 19, 2020 by Jasmine Crittenden