How to spend the full day at one of Sydney's cleanest, most idyllic beaches.

We're all guilty of visiting the same old haunts week in, week out. Given that Sydney is teeming with new places to while away a summer's day, though, it's time to get out and explore. Next destination: Balmoral Beach. Even if Balmoral is your local, when's the last time you've paid a visit to some different spots from your norm? To help you out, we've curated a sunrise to sunset itinerary to show how to pack the most into an excursion to Balmoral Beach.

From sunrise on the wharf to breakfast at the iconic Balmoral Boatshed, stand up paddleboarding to bushwalking on the foreshore, you can have an active, nature-drenched, food-filled (and sun-safe) day all at once down at one of Sydney's cleanest, most idyllic harbour beaches. Plus, it's only a fifteen-minute drive from Sydney's CBD. Grab your sunnies, slip into some clothes that'll protect that delicate skin of yours, slap a hat on your noggin and slop some SPF 30+ all over — it's time to explore. 6AM: CATCH SUNRISE FOLLOWED BY A BEACH WALK AND OCEAN SWIM

You know what feels wholesome? Kicking off a summer's day watching the sunrise with a stroll down Balmoral Beach. Sure, it means getting up early, but it also means catching some sweet, sweet natural phenomena before the day gets hotter and the crowds descend.

Once the sun is up and things start to get hot, cool off with an ocean dip. For swimming, opt for the north end (to your left if you're facing out to sea) where the water is always crystal clear and you'll be away from docked boats and the naval base down at the southern end of the beach. 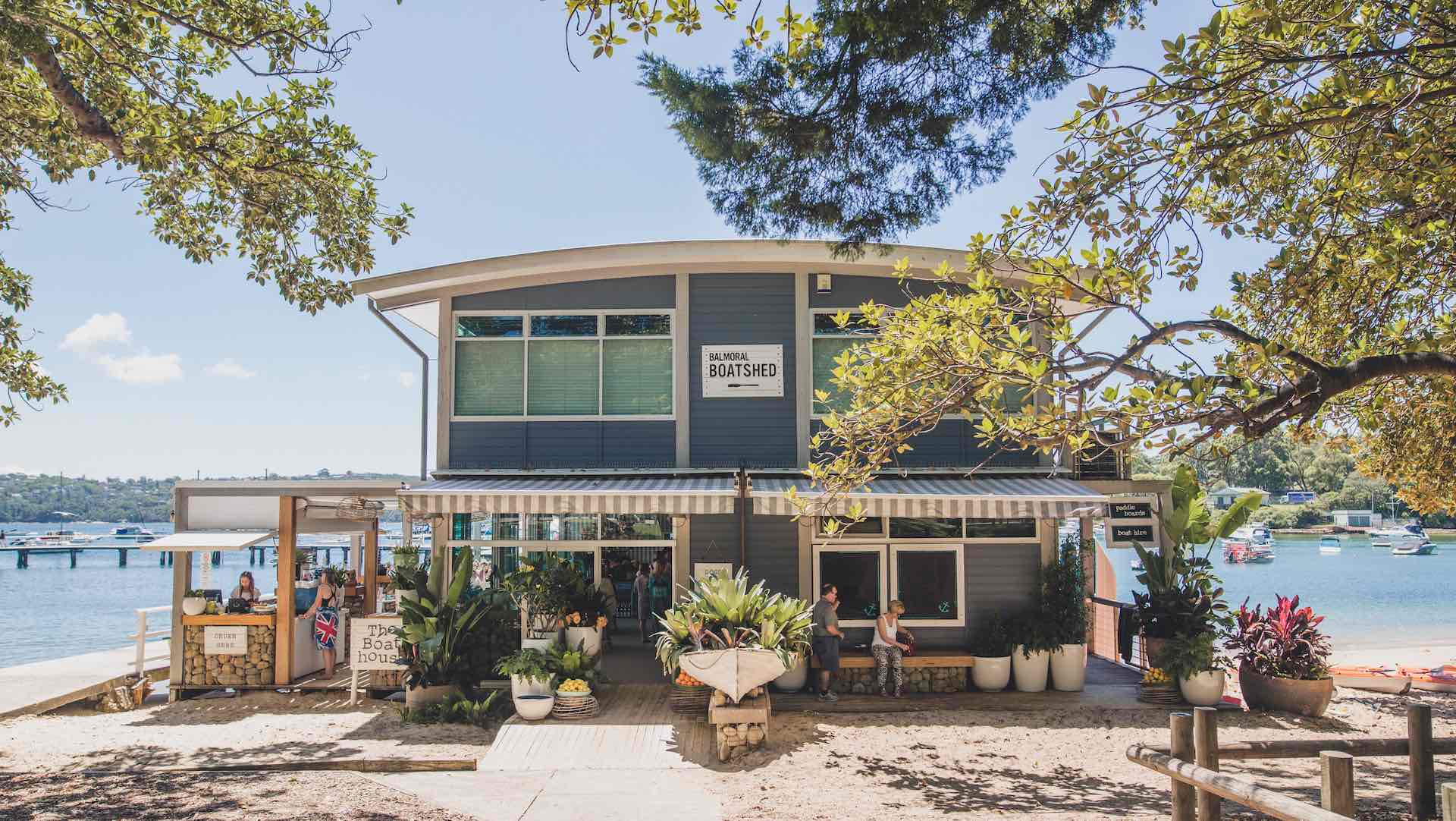 8AM: BREAKFAST AT THE BOATHOUSE BALMORAL

A visit to Balmoral really isn't complete without a stop at the iconic Boathouse. Designed to a T with the sea in mind, the cafe is a nautical aesthete's wonderland, where even their cappuccinos come with a dusting of chocolate in the shape of an anchor. Open from 7am, order some breakfast from their seasonal menu at the counter, and snag a seat over the water on the deck outside — but make sure you grab a spot under an umbrella. An honourable mention goes to their green eggs and ham with grilled leg ham and basil pesto and the matcha, turmeric and masala chais — of which the masala comes on a wooden serving board with the honey and cinnamon separated to add according to taste, so that's fun. 10AM: STAND UP PADDLEBOARDING

After breakfast, wander around the wharf ten metres to Balmoral Boatshed and hire a stand up paddleboard. Balmoral is a prime SUP boarding location because the water is almost completely flat. It's technically a harbour beach, so there are no waves to contend with. They say SUP boarding is a good workout for your oblique muscles, but that'll depend on whether you treat your paddle out as a leisurely splash or an athletic pursuit. Remember to wear a hat, some SPF 30+, sunnies and some kind of rash vest when out on the water since the sun will enter its strongest point, and the water reflects those UV rays back up at you. 12PM: LUNCHTIME FISH AND CHIPS FROM BOTTOM OF THE HARBOUR

Bottom of the Harbour is a Balmoral institution. Their fish and chips is the thing to order, but if you're not feeling seafood, they have a solid selection of burgers on offer including The Full Monty and a chargrilled eggplant vegetarian option. Order to take away, and head across the road to the benches along The Esplanade, Balmoral Beach's foreshore walkway. With UV radiation at peak strength at this time of day, take a seat in the shade — hat and sunnies on, sunscreen reapplied — as you chow down. 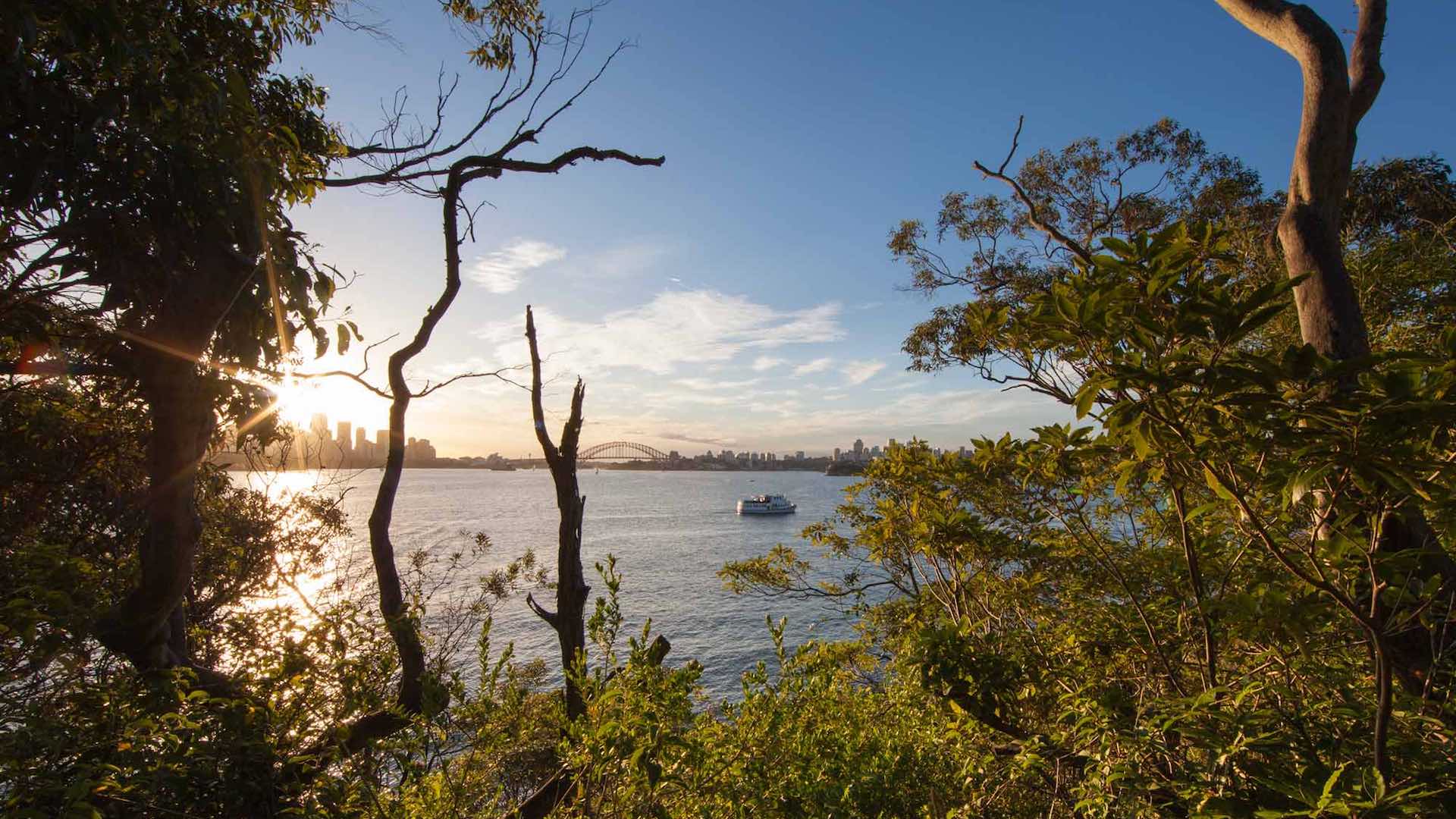 1.30PM: BUSHWALKING ALONG THE FORESHORE

One of the unique things about Mosman is that despite its relative proximity to Sydney's CBD, it's shrouded in nature. This is partially because Sydney Harbour National Park lays claim to a decent proportion of Mosman's total land mass. After lunch, be sure to re-apply that SPF, and head down to the south end of Balmoral to link up with the Harbour Bridge to The Spit Bridge foreshore walking track. If you walk about 2.7 kilometres, you'll hit Chowder Bay, which then turns into the Chowder Bay to Bradleys Head walk. Stroll along the bush track and simply turn back towards Balmoral when you've had your fit fix for the day. Once you reach Balmoral again, check out an Aboriginal rock shelter occupation site open to public view at the southern end of The Esplanade, opposite The Boathouse. Just before it closes at 4pm, grab a cheeky afternoon pick-me-up from the Bather's Pavilion Kiosk where they use beans from Alexandria's The Grounds. There's a sweet, little council-owned rotunda across from the kiosk, which points you to Rocky Point Island, or what's known simply as 'the island' locally. Cross the small bridge, and snag a spot in the grass or on its small rocky cliffs where you can chill looking out to sea at North and South Head while sipping on your coffee.

Now that the strongest time of day for the sun has passed, head back onto the sand for another dip in the water before the sun sets. If snorkelling's your thing, make sure to pack your gear so you can pay a visit to the critters living in the water around the island. You'd be wise to stick around this area either way as Bather's Pavilion has public change rooms and showers you can use post-swim, which is highly convenient since dinner's at Bather's. Winddown your day with dinner at Bather's Pavilion. For formal dining, there's the Restaurant and for something more casual, there's the Cafe. Both serve up Mediterranean-inspired cuisine to match the seaside vista, with the one-hatted Restaurant boasting an extensive wine list and seasonal cuisine. For both the Restaurant and Cafe, it's recommended that you book.

If you've never been to Bather's, the building alone is worth checking out. The heritage-listed, art deco pavilion was the product of the surge of interest in swimming that began in the 1890s. In response to this emerging beach culture, during the affluent 1920s, councils built new sea walls, tidal walls, sea pools, change rooms, kiosks and facilities which have become a big part of the identity of their locations, Balmoral being no exception. This culminated with the grand pavilions of the 1930s, such as those at both Balmoral and Coogee, and now these pavilions have become iconic seaside eateries.

As you explore Balmoral Beach this summer, make sure to stay sun safe — slip, slap, slop, slide, don't forget to reapply and seek out that shade. For more information on how to protect your skin from the sun visit Pretty Shady and join the generation that's putting an end to skin cancer.