From hidden inner-city spots to historic oceanside sanctuaries, these idyllic bodies of water are must-visits as the temperature warms up.

As the warmer months approach, bringing blue skies and long days with them — and Sydney begins to open up from another lockdown, too — the New South Wales Government has announced the reopening of outdoor pools across the city from Monday, September 27.

While Sydney's beaches are some of the best in the country, we sometimes forget that we also have a collection of outdoor pools unlike anywhere else in the world. There's no better time to go for a swim and take advantage of these hidden inner-city spots and historic oceanside sanctuaries. Undeniably the best place to see the spectacular views of Bondi Beach, Icebergs has been around almost 100 years and has become a Sydney institution. No other pool can really compete with the views, atmosphere and history of Icebergs. It also has the added benefit of being one of the only licensed swimming pools in the world — and, being a swimming club, the drinks are pretty reasonably priced. Hang out by the side of the pool, or head upstairs to one of the balconies for a view of the ocean. For inner-Sydney locals who can't quite make it to the coast for a swim, Prince Alfred Park Pool is a slice of summer perched between Surry Hills and Redfern. It's the buttercup yellow sun umbrellas that bring the Riviera vibe, as well as the lawns strewn with sunbathers. If the area around the pool is a bit crowded, you can always head to the park to soak in some sun after your dip. The facilities here nabbed two National Architecture Awards back in 2014 when they were upgraded, and the 50-metre pool is always at that jump-right-in temperature. Consider getting the 360 Membership, which gives you access to the City of Sydney's four outdoor pools plus fitness facilities. Hidden away within the green expanses of The Domain, the Andrew (Boy) Charlton Pool feels a world away from the city while still being in the heart of the CBD. The saltwater pool is perched on the edge of the harbour, with spectacular views over the city and the Botanic Gardens. Hang out on the wooden terrace or grab a drink upstairs in the openair Poolside Cafe for a spot to eat — just make sure you wait to swim after eating if you believe the old tale. While the pool can get crowded at lunchtimes and weekends, its worth it for the views and the refreshing salt water. 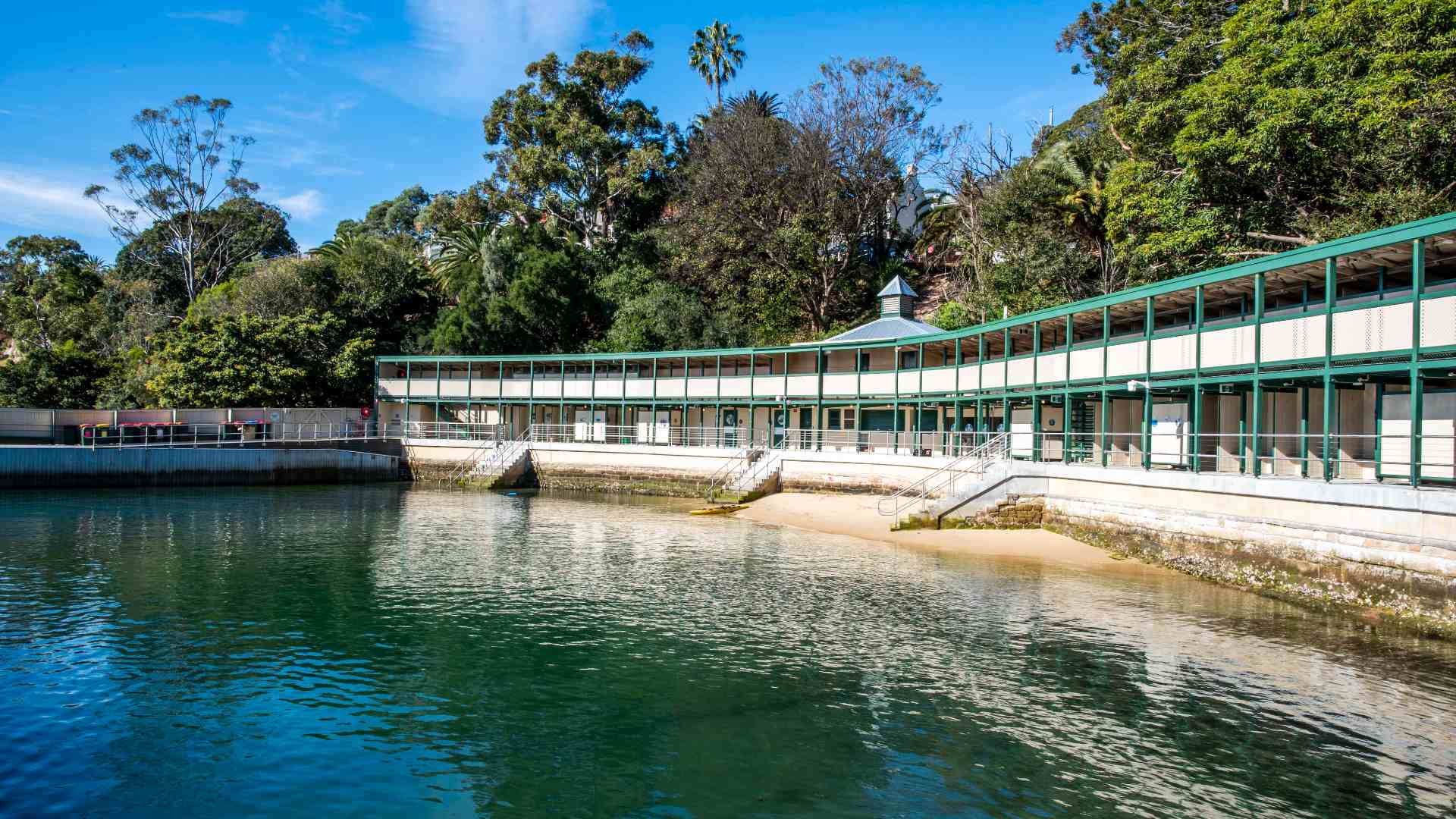 Constructed in the 1880s, Balmain's Dawn Fraser Baths is Australia's oldest public pool. The beloved inner-west swimming hole was renamed after Olympic swimmer Dawn Fraser in the 60s and has recently undergone a huge multimillion-dollar renovation. The pool reopened to the public on Wednesday, September 8 after two years which saw it score a series of structural and cosmetic improvements. The revamp ensures the public pool will be standing for many years to come, while protecting its heritage architecture. Here, you can hit up the beach are for a sunbathing session and a more low-key dip, or stay fit by taking on the lane pool.

How much: $6 (but free until the end of September) Just south of Coogee Beach along the coastal walk, Wylie's Baths has a picturesque canopy and kiosk elevated above the pool to provide panoramic views over the ocean. The baths were established in 1907 by long-distance swimmer Henry Alexander Wyllie, whose daughters went on to become Australia's first two female Olympic swimmers. The historic pool also boasts Massage by the Sea, an outdoor seaside massage therapy centre where you can get warm rocks placed on your back as you eavesdrop on the swimmers below.  There's also a saltwater ladies pool just north of Wylie's that's recently undergone work from the council if you're looking to have a dip with the girls. 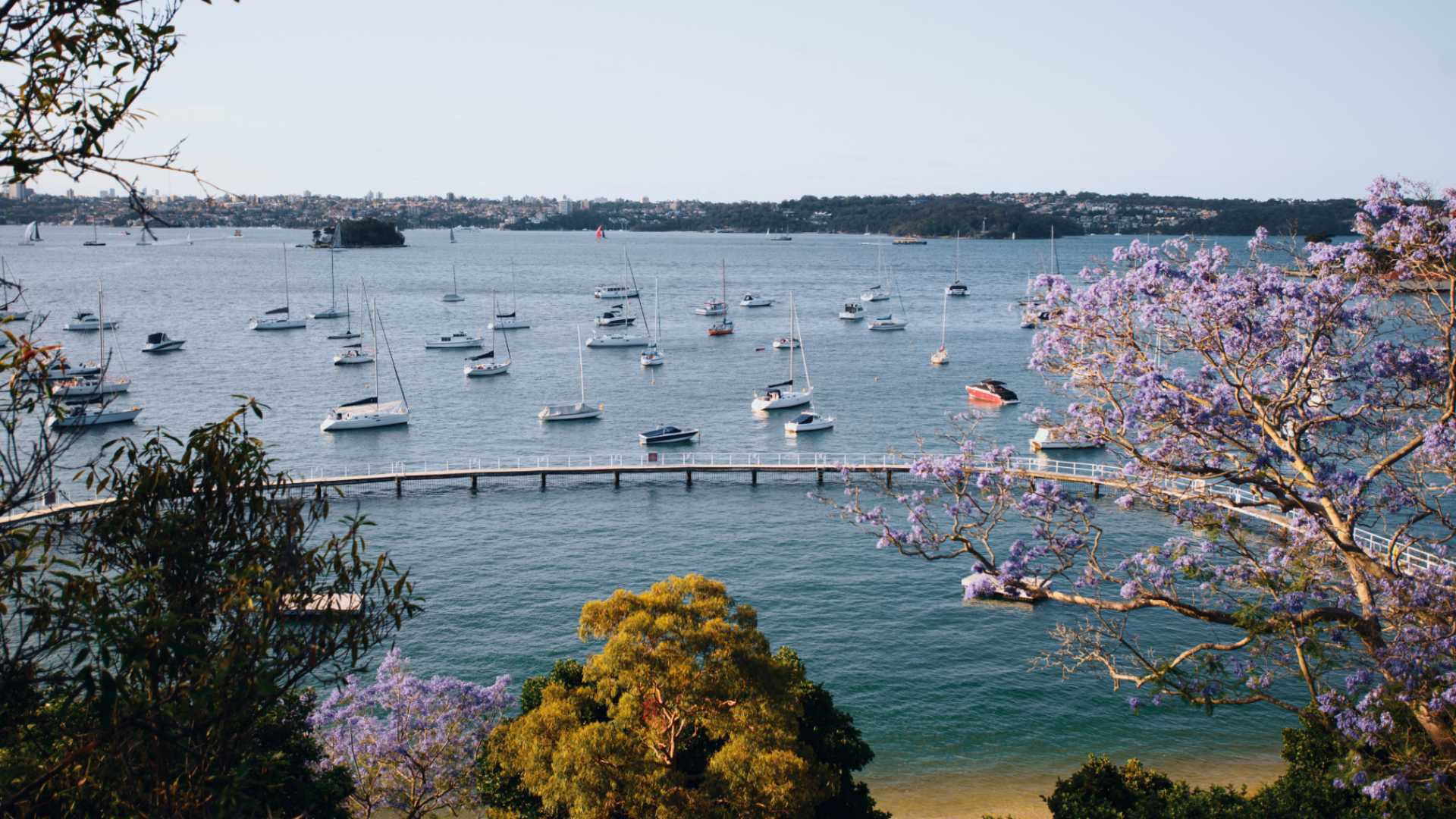 Murray Rose Pool is less of a pool and more of a fenced off section of the harbourside Seven Shillings Beach, adjacent to Blackburn Gardens, but that doesn't stop it from providing scenic and serene saltwater swims. While it can get pretty busy on weekends, head along at the right time and the pool is a little piece of inner-east paradise, hidden from the road and only accessible by foot. Head down the stairs behind the Woollahra Council Offices on New South Head Road to discover the ocean pool and its boardwalk, which runs around the top of the shark net — providing a spot to stop and look out over the ocean. Plus, if you're seeking a short respite from your swim or to imagining yourself in a summery coming-of-age film, there are two floating pontoons in the centre of the pool. Freshwater Beach and its locally loved ocean rockpool can provide a relaxed respite from its generally busy neighbour in Manly. This northern beaches gem can be found at the head of Curl Curl Board walk just north of Freshwater Beach, with the picturesque spot placing you into the middle of the sea with endless ocean views in front of you. Here, you'll be splashing around in a simple 50-metre pool in which you can stand and soak — or take off for a few laps if you're looking for more of a workout. 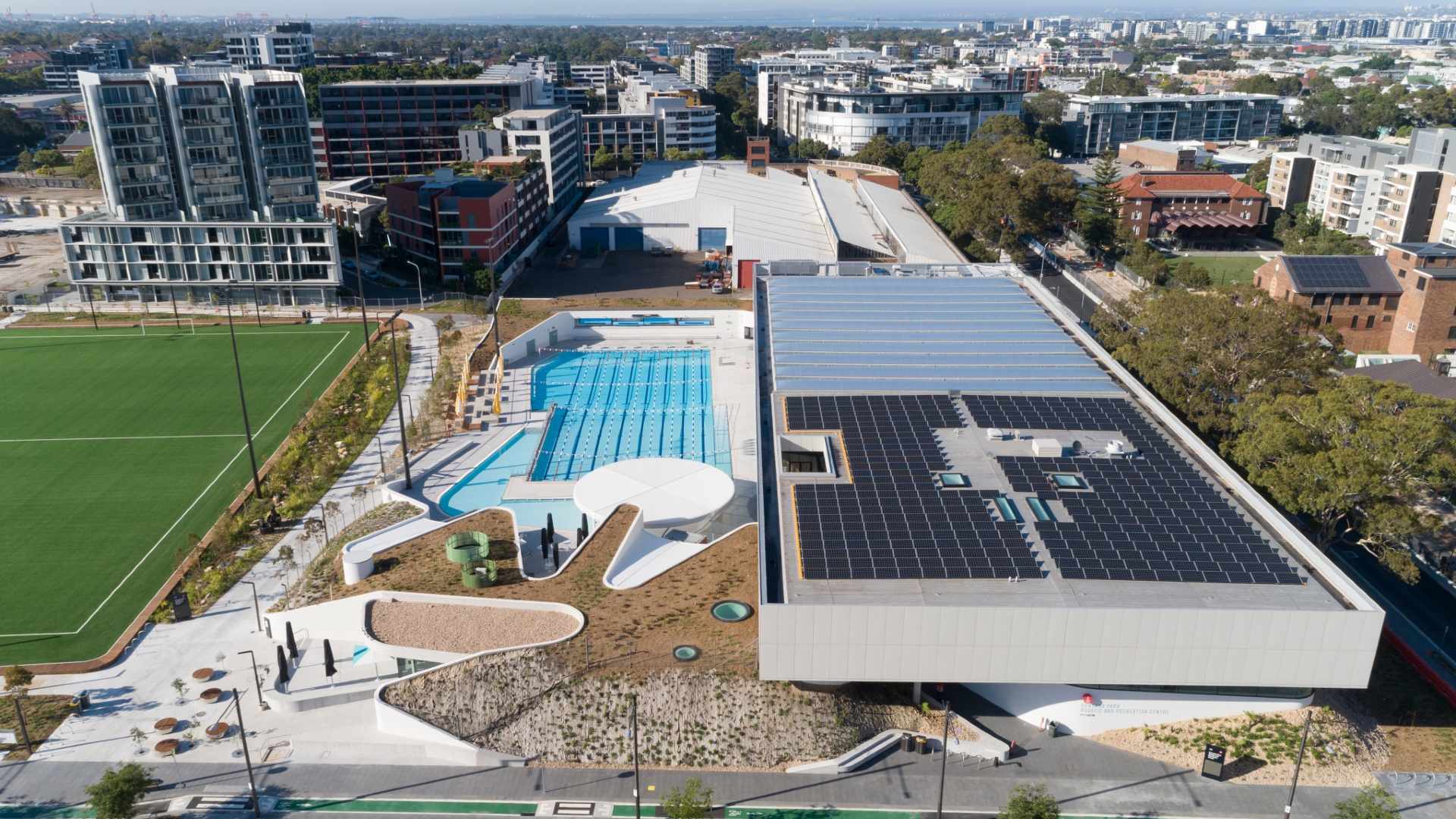 Gunyama Park Aquatic and Recreation Centre is the largest aquatic centre to open in Sydney since the 2000 Olympics. The Zetland facility was unveiled back in February and features four different swimming areas. Gunyama, which means "wind from the southwest" in the local Dharug language, is fitted out with a 50-metre heated outdoor pool surrounded by a 'beach' area inspired by Sydney's ocean pools. Around the facility you'll also stumble upon three indoor pools, an indoor and an outdoor gym, an openair yoga deck, a cafe and a multi-purpose sports field. If you're down in Sydney's southernmost suburbs, head to Shelly Park Beach where you'll find an expansive ocean pool alongside a big patch of green. Dunk your head in, set out to do some laps or go for a dip with the family at this saltwater swimming hole, before drying off by soaking in some rays in the park. Dogs are allowed on a leash in the park, so you don't have to worry about leaving Spot at home — as long as you have someone to watch over him while you hit the water. The Dee Why rockpools are easily reached by the promenade along the beach, and are formed out of concrete walls as well as the natural sandstone wall to the side. While the surfers head down to the beach, the slower-paced head to the rockpools. There are two pools up among the rocks: the family-friendly toddler pool, and the 50-metre pool that's ideal for a quick dip of some early-morning laps. On weekends, the pool is a bustling hotspot for families — so if you're a solo swimmer looking for a more peaceful swim, head by on a weekday or late afternoon.

Where: Oaks Avenue, Dee Why Bronte Baths sits a little south of the beach, surrounded by the cliffs and park. Its location at the end of the popular Bondi to Bronte costal walk makes it ideal for anyone looking to squeeze in a walk and swim into the same afternoon. The baths were built in 1887 and have remained a favourites for locals and tourists ever since, attracting everyone from families to serious swimmers. Here, you can hang out on the rocks, warming yourself like a lizard before diving in — or you can float along the edge of the pool as you stare out at one of Sydney's most photographed beaches. 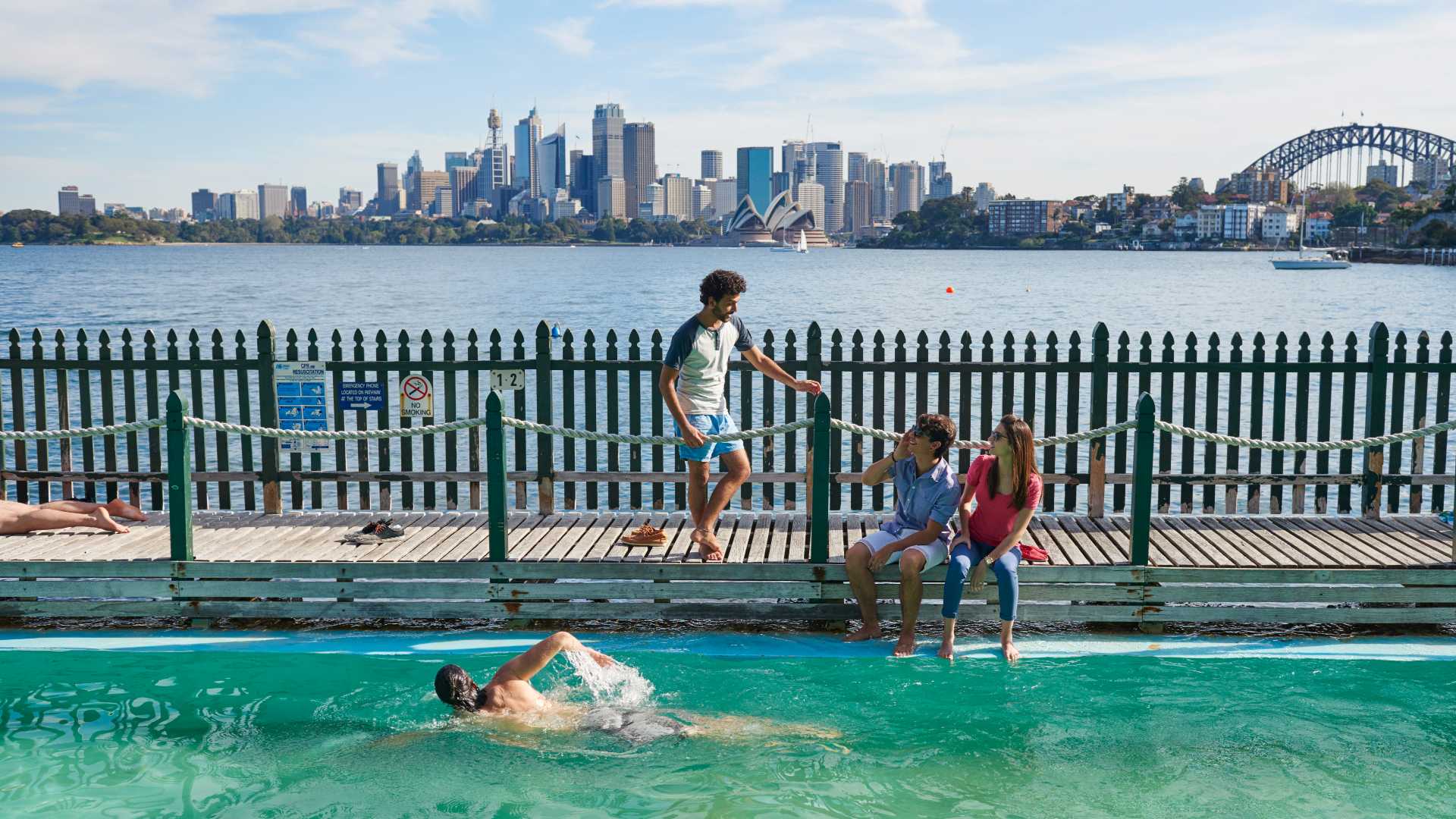 Mccallum Pool was originally a rockpool created by locals in order to facilitate safe harbour swimming, before being built up into a proper 33-metre harbourside pool. If you appreciate a little early-20th century charm, this spot will delight you with its unique heritage feel. The current facilities were restored in the 1980s by North Sydney Council, while ensuring they maintained the pool's original 1920s features. Located just across the bridge in Cremorne Point, the harbour views here are unbeatable, with a panoramic perspective of Sydney's CBD and the Sydney Opera House.