See Sydney sparkle from the water.

You've seen Sydney and its surrounds from rooftop bars, strategically positioned restaurants and mountaintops. But jump in a kayak, where you can watch at human-powered pace, from sea level, and you'll discover a whole new perspective. Here are nine of Sydney's best locations for sea kayaking — from tranquil National Park-flanked rivers to secretive sections of the harbour.

If one of these spots is within your five-kilometre radius, set aside an hour for a day for exploration and leave the mainland behind for a little while. Every spot on this list has kayak hire nearby so you're sorted if you don't have a kayak lying around. When heading out on a kayak, make sure you're following all current NSW public health orders. You can stay up to date with the current NSW restrictions at the NSW Health website. 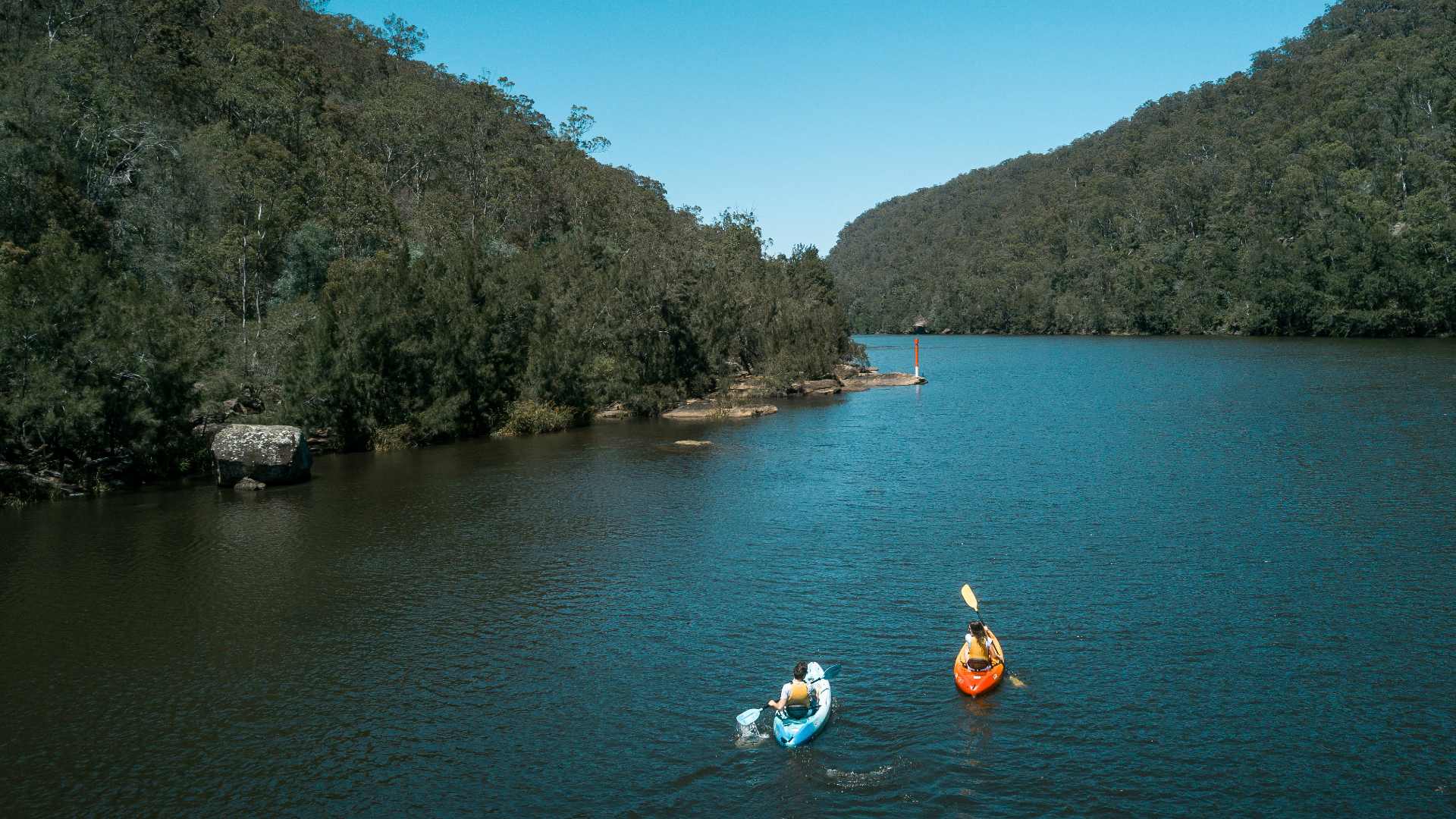 Inspiration for Kate Grenville's The Secret River and muse to John Williamson, the mighty Hawkesbury flows for 120 kilometres — starting from its head at the confluence of Nepean and Grose rivers to its mouth near Broken Bay. Grab a kayak at Brooklyn and set off to see as much — or as little — of it as you desire. If you only have a few hours to spare, try circumnavigating Dangar Island. Hawkesbury River Kayaks can take care of gear needs and are open daily (with pre-booking a must). Pittwater has all the beauty of its more famous counterpart, Sydney Harbour, but a much smaller population. On the eastern side, the northern beaches peninsula limits development and, on the western, the Ku-Ring-Gai Chase National Park stops it altogether. In fact, several spots, like Coasters Retreat, are only accessible by water. So expect your secret beaches to feel even more clandestine than usual, and don't be surprised to find dolphins crossing your path. Bayviews' Paddlecraft, located in Pittwater's south, is currently open for pre-booked kayak rentals only, while Pittwater Kayak Tours is set to reopen once restrictions ease. And, once restrictions roll back, make a weekend of it with our favourite Airbnbs in the area. Beginning at Robertson in the Southern Highlands and ending 100 kilometres later — where it combines with the Grose River to form the Hawkesbury — Nepean stops millions of Sydneysiders from going thirsty. Its best bit for paddling is the 25-kilometre stretch between Penrith and the Junction Reserve. It's tide-free, which allows you to travel in any direction you like. On the way, you'll pass through the stunning Nepean Gorge, which towers as high as 150 metres at some points. Keep an eye out for wombats, wallabies, pelicans, kingfishers and eagles. Rental kayaks can be found at Horizon Line for $15–60 per day for a single depending how long you take it out for. Paddling around Manly means meeting fairy penguins, pulling up on secluded beaches and, if you're in action shortly after a downpour, quite possibly standing under a waterfall. The stunning waters of North Harbour can be traversed in anywhere from one-to-eight hours, and the calm waters means no prior kayaking experience is necessary. Take snacks with you to enjoy on the water, or pick up lunch from one of Manly's many beachside takeaway spots. Manly Kayak Centre will hire you a single for $25 per hour or a double for $45 per hour, with a maximum of four hours on offer. Booking is essential during lockdown. From Spit Bridge, Middle Harbour is your proverbial oyster. And you might well strike a literal one, too. Tiny golden beaches and waterfront parks are abundant here. Head westwards to explore beautifully protected bays like Willoughby and Sailors, or go further afield to Middle Cove. Meanwhile, on the east side, you'll find Chinamans Beach, Clontarf and Balmoral. For a bigger challenge, take on Grotto Point and make your way to Manly. Sydney Harbour Kayaks can sort out a kayak hire for you Wednesday–Sunday, starting from $25 per hour. For an urban escape, get started in Rozelle Bay. From there, the scope of your journey will depend on how much time — and strength — you have stored up. Newbies (or those feeling lazy) needn't go far — there's always the option of dropping into Blackwattle Bay for a leisurely stroll around the water. Meanwhile, keen paddlers can set about conquering the Balmain Peninsula, passing Cockatoo and Rodd islands along the way. Annandale Boat Hire can organise a kayak for you, starting at $49 for two hours. Tandem kayaks are also on offer for $79. From Rose Bay, you have two options for a day on the water. On one hand, you can cling to the calm, shallow waters near the shore, travelling either northeast towards Vaucluse or west towards Point Piper. On the other, you can grit your teeth and make your way across the deep blue for Shark Island. Go on a weekday and there's every chance you'll have the island all to yourself. You need a National Park entry ticket to land, which is doable for seven bucks by calling ahead. Kayaks are available at Rose Bay Aquatic Hire, with one-hour bookings costing $25 for a single and $40 for doubles. Two-hour rental is available before midday each day. For a river that's essentially in the suburbs, the 36-kilometre-long Woronora transports you into a incredible variety of pristine natural beauty. Thankfully, much of it is flanked by the Dharawal State Conservation Area, as well as the Heathcote and Royal National Parks. Expect beaches, rocky platforms, thick forest and, in the middle reaches, steep banks. Leave time to explore tributaries like Loftus Creek (when the tide is high) or venture as far as Georges River. Kayaks, canoes and paddle boats are available for hire at The Boatshed starting at $25 for single kayaks and $30 for stand up paddle boards. While Bundeena Outdoor Adventures is currently closed due to Sydney's lockdown, it will be on hand to supply you everything you need for a day on the water as soon as it can open up. It's at Bundeena, just south of Cronulla, that Sydney gives way to the Royal National Park. Spend all day gliding around Port Hacking's impossibly clear waters and lazing about on pretty beaches, or get more daring with a trip up South West Arm Creek. Further west, the 26-kilometre-long Hacking River offers a more extended trek. Singles are $25 per hour or $75 for the day, while doubles are priced at $50 and $130 (respectively). The company also runs regular kayak adventure tours around the region.

Published on September 10, 2021 by Jasmine Crittenden