Even while seats went empty, Sydney's shrine of fine booze, charcuterie and 'canned stuff' was anything but quiet.

Even while seats went empty, Sydney's shrine of fine booze, charcuterie and 'canned stuff' was anything but quiet.

"It was a rollercoaster, really," says Continental Deli Co-Owner and Manager Michael 'Mikey' Nicolian of COVID-19. "The unpredictability and fear of the uncertainty, of what was going to happen, was the scary part... You start doubting yourself and thinking about worst-case scenarios." But, swing by either of Continental Deli's locations, Newtown or the CBD, now and you won't notice too much of a difference.

Much in line with the deli-cum-bar's 'Yes We Can' motto, the Continental crew — Porteño's Joe Valore and Elvis Abrahanowicz, Head Chef Jesse Warkentin and Nicolian — refused to fall on their swords. After the government announced the mass closure of indoor venues — and some subsequent sore heads the next morning — the boys closed up for 24 hours, threw whatever they had into a pot to make soups, got to work on canning and reopened as a sandwich and retail shop the very next day. With its canning setup already slinging a steady supply of cocktails, gelato and flan, and the Newtown store's status as a neighbourhood institution, the Sydney business was somewhat prepared for a global pandemic. Demand was steady almost as soon as the reimagined shop launched — and it's partially thanks to the panic-buying at supermarkets.

When the canned goods' aisle at your local grocer was barren, Continental was there with tins of beef gochujang (made with A-grade dry-aged ribeye, no less), spiced cauliflower and fennel soup, curried lentils, baked borlotti beans in chipotle sauce and, for dessert, Flan in a Can. Not to mention the freshly baked sourdough, oils, sardines, LP's sausages, olives, eggs, merch, NY-style meatball subs, pastas, cheeses and charcuterie platters.

Nicolian made sure everyone knew about it, too. "I don't do anything except work and then eat and drink out. That is literally my day-to-day life. And I don't have a clue who's open or what they're offering," he told CP. "So, I needed to keep pushing the message on Instagram."

But, really, it was the super-popular canned cocktails which had us — Concrete Playground employees and Sydneysiders at large — coming back. Dropping the price down to $12 (from the usual $18 you'd pay at the bar), Continental made the drinks available for takeaway for the first-time ever as soon as the NSW Government deemed it legal. Back in BC (Before COVID) times, you might've popped into either outpost for a Mar-tinny. During lockdown, we were knocking back a Quaran-tinny (or few) on our couches. 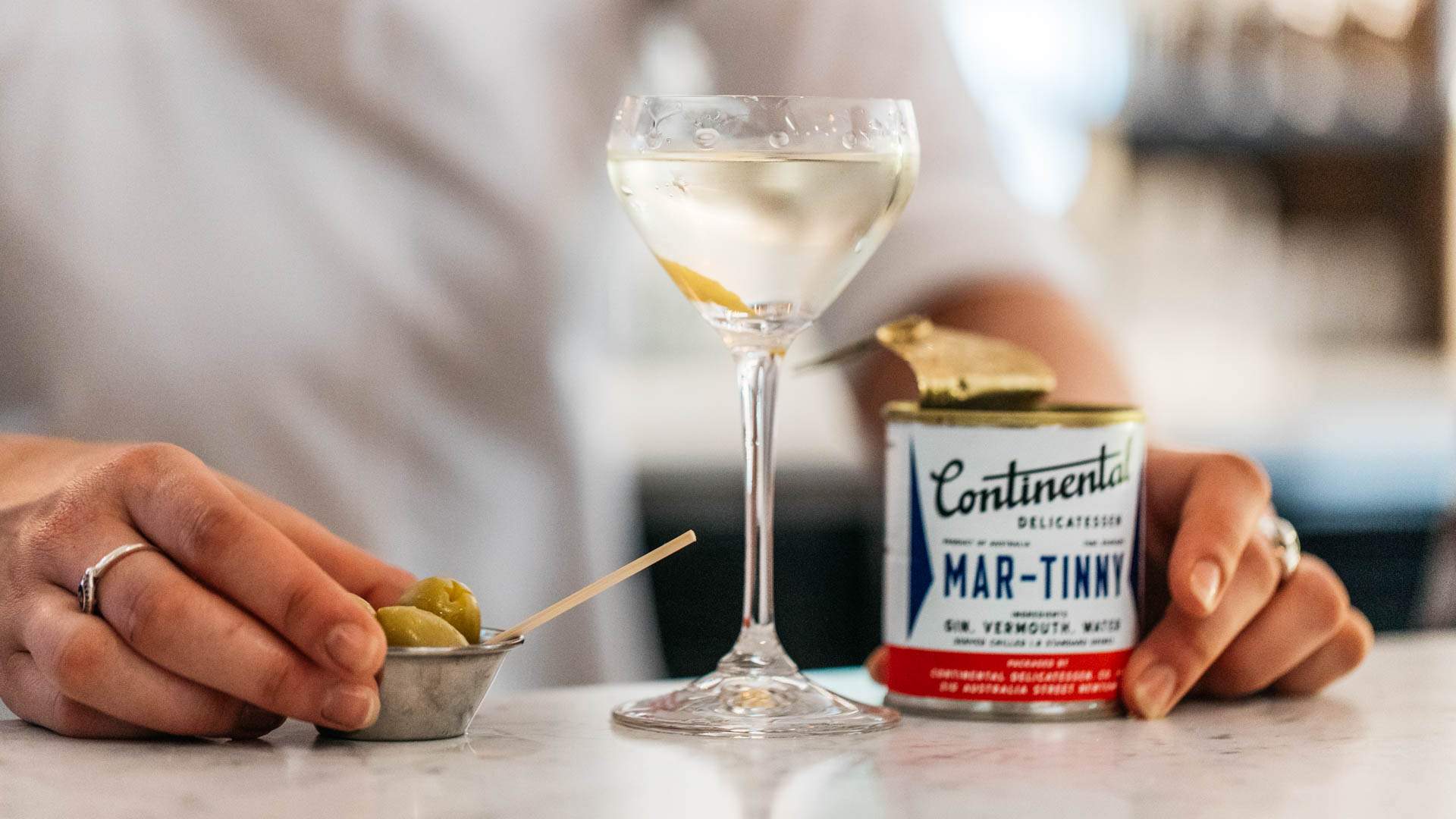 "I was really surprised with how quickly everyone jumped on it," says Nicolian. "[Demand] was as high as what we'd do in service week-to-week. Actually, we probably did a little more over lockdown." By keeping production going, Continental kept its main canning guy, who wasn't eligible for JobKeeper, in work. When asked if canned cocktails to-go will stick around, Nicolian told CP,"100 percent yes — as long as we're legally allowed to."

While canned cocktails for those at home was a blessing, delivering them wasn't all smooth sailing. "It's cool being able to bring what we do to people wherever they are," says Nicolian. "But, fuck, it was a nightmare. With delivery, there is definitely that room for error. Maybe someone's going to get a couple of our Mar-tinnys and drink them warm." 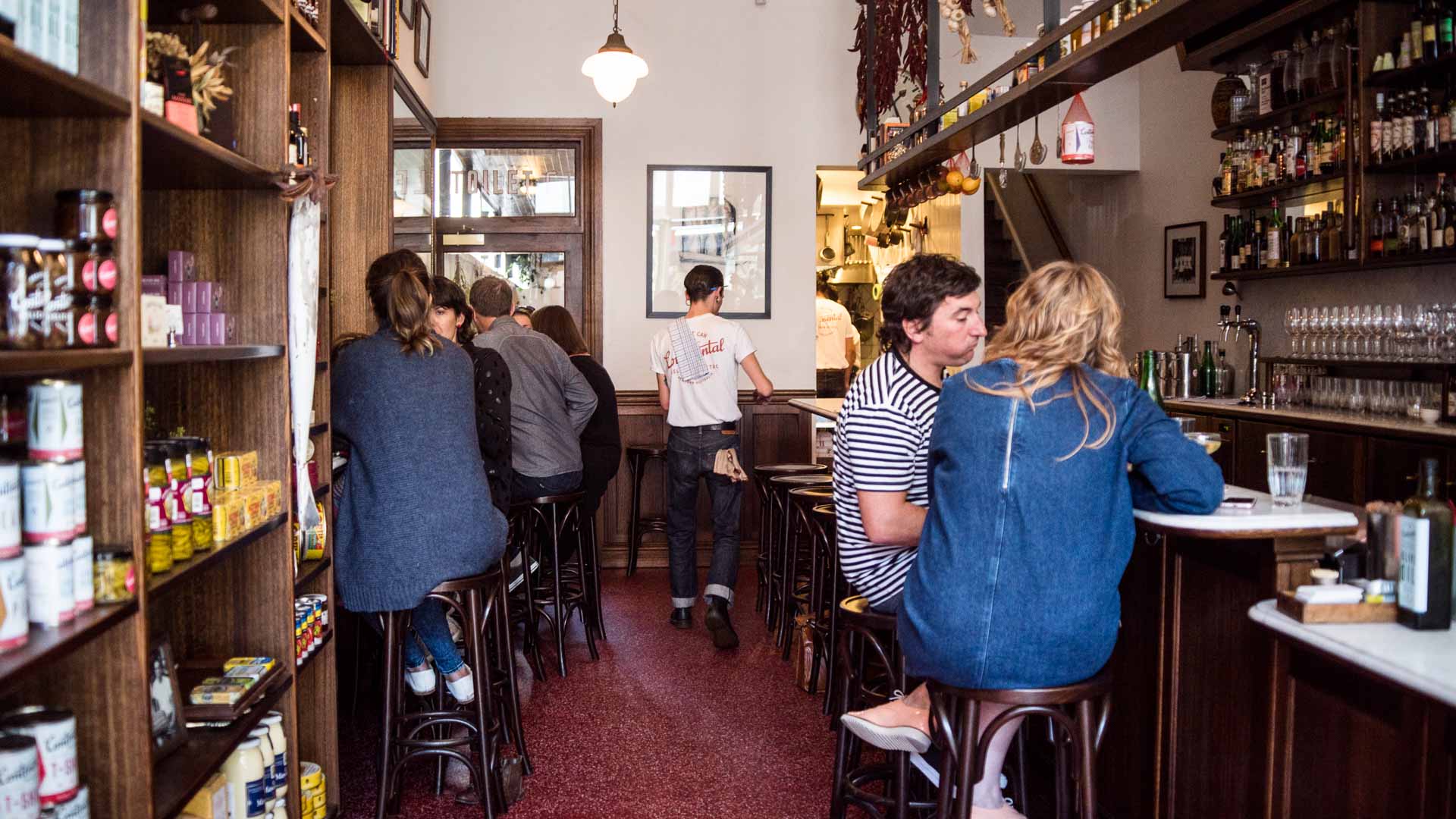 Now, the Newtown spot is much the same, but with fewer people at the bar and every second table in the upstairs bistro empty. "It's a slower pace with a smaller team and it's kind of nice." At Continental CBD, however, you'll notice a few changes. The once open-plan space is now divided by back-to-back leather banquettes, separating the bar area and dining room.

Using the time during lockdown to tweak a few things, such as the CBD fit-out, dipping a toe into deliveries and canning more than ever before, the crew is "keeping things more lean". "We'll always adapt and always look to try and make it cooler, make it better," says Nicolian. "The place is still evolving."

What's commendable is that Continental — and the crew behind it — never really wavered; it's backbone still intact. You'll still get some mighty fine (and stinky) cheeses, top-quality meats, tinned seafood, consistent cocktails and, of course, affable staff.

"It might be corny or a bit cheesy, but we put love into everything we do and we do it because we love it and love being a part of a community. And that hasn't changed and it never will change," Nicolian says, wrapping things up as Continental Newtown is about to open, with a line already forming. "Thanks, really, to everyone who's supported us. And that's for the industry, not just Continental. A lot of places have been able to survive on the back of the support."

Continental Newtown and Continental CBD are now open again for dine-in service every day — and, yes, you can still sip a Quaran-tinny at home, just be sure to drink it cold.

Continental is part in Concrete Playground's series 52 Bars in 52 Weeks, exploring COVID-19's impact on the city's bars and encouraging Sydneysiders to pull up a seat, every week.

Published on July 17, 2020 by Cordelia Williamson