UPDATE Friday, July 2: The French bistro is improving lockdown with the Burger 916. Swing by Potts Point from 4pm each day to grab one, however be quick, as the burger is limited to 50 per day. Pre-orders are available by calling 916 766 67.

What happens when you combine two of the city's hottest chefs, an award-winning young-gun sommelier and a suburb on the brink of a revival? Bistrot 916. Run by Restaurant Hubert colleagues chef Dan Pepperell (Alberto Lounge, 10 William Street and Frankie's) and sommelier Andy Tyson (Alberto Lounge), together with long-time Rockpool Dining Group chef Michael Clift, the Potts Point restaurant is now welcoming in Sydney Francophiles through its folding glass doors.

Pepperell and Tyson didn't set out to reproduce Restaurant Hubert, but the pair's decision to leave the Swillhouse group's OTT French restaurant and open a bistro of their own warrants a comparison. The Bistrot 916 space may not have the same labyrinthine, escapist quality as Restaurant Hubert, but it doesn't need to: the food and wine contain enough creativity and chutzpah to take you on a journey on their own.

In place of Hubert's well-lit red velvet-heavy interior, Bistrot 916 is dark and restrained. Pink paper tablecloths cover dark wood tables, wines line the walls and the space is lit by soft pendant lights and candles. Waitstaff and sommeliers in white chef jackets walk you through the restaurant's single-page food menu, which starts with a so-good-you-must-order-two scallop ceviche with tiger milk ($22) and a tuna tartare with beef fat-fried potato ($26). 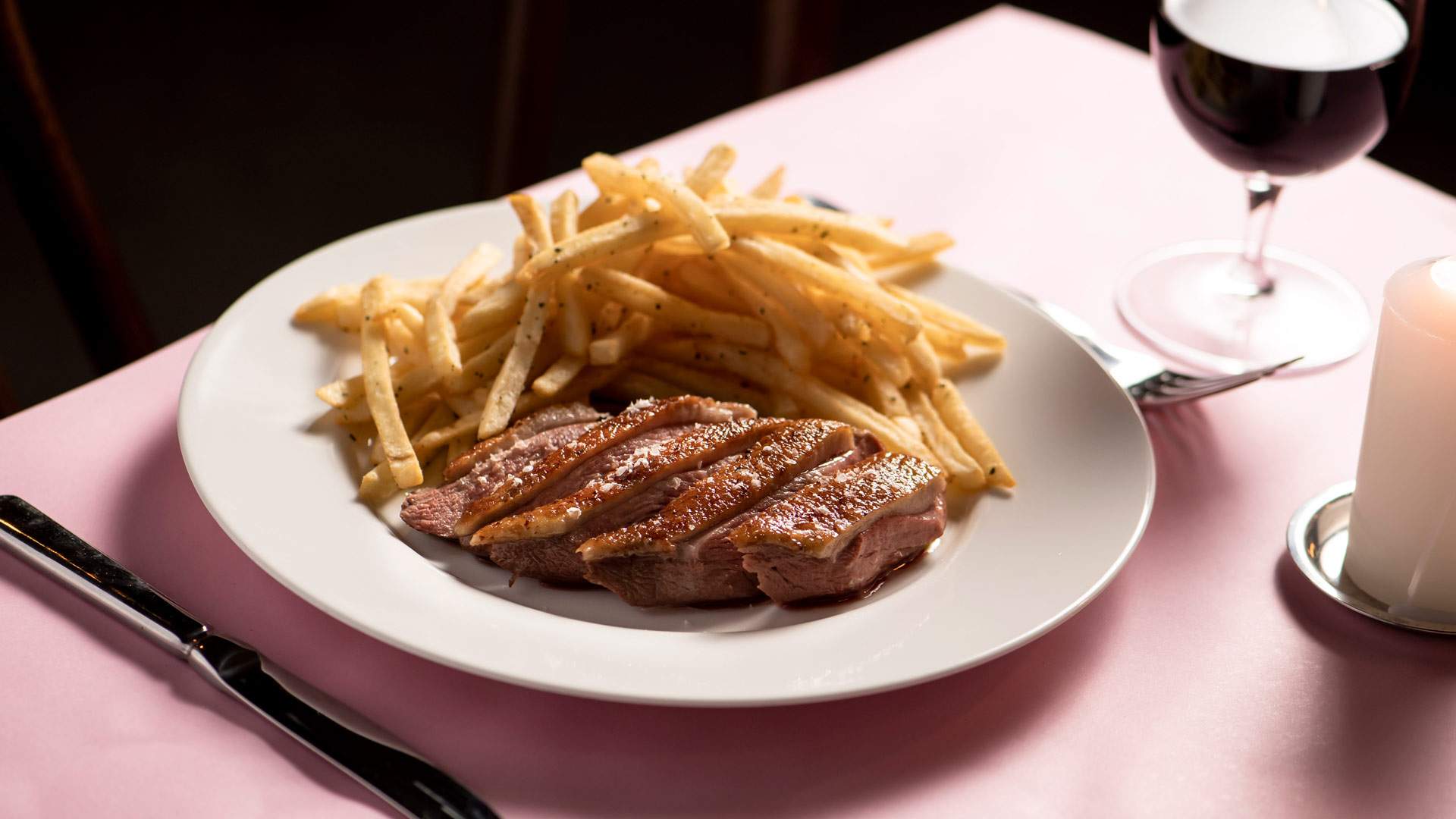 For entrees, you can keep it simple and go for French classics — such as chicken liver parfait and pork rillette ($21) — or follow Pepperell down the path towards the more unusual. Boudin noir spring rolls ($24), fried lamb's brains with smoked eel mayonnaise ($18), snail pasta ($24) and grilled tongue ($24) await you here, before a quick veer left leads you back to French bistro staples for the Plats Principaux ($36+): duck, steak or lobster served, of course, with frites.

If you're after a cocktail, a Death in the Afternoon (champagne and absinthe) is our pick, but you can also go for a well-made negroni, sazerac or mojito, too. For wine, Tyson has selected a suitably lengthy collection of predominantly French drops that trundles through Beaujolais, Jura, Languedoc and Rhône for all less than $20 a glass.

Taking over the space next to Fratelli Paradiso, formerly home to Merivale's Lotus, Bistrot 916 is the latest exciting addition to a suburb quite clearly on its way up (again). While Potts Point has been plagued by lockout laws and some big-name closures over the past couple of years, a spate of openings have occurred in the last few months, including a new pizza joint by the Monopole team, a charcoal chicken by Morgan McGlone and chef Ben Sears' Tel Aviv haunt.