An underground steakhouse by the Bistecca team.

Get Directions
Call
Visit Website
This venue is part of

One underground restaurant dedicated to steak wasn't quite enough for Bistecca's James Bradey and Warren Burns. The Liquid and Larder directors, and minds behind The Wild Rover and Grandma's Bar, have also opened The Gidley — an opulent basement restaurant inspired by old-school New York and London steakhouses.

The subterranean setup means there are no windows and no distracting "beautiful harbour views", says Bradey. Lack of distractions is a passion of the restaurateur duo, who banned phones at the table at their original steak spot Bistecca. The same goes here, too.

Instead of Instagram, you'll be soaking up the lusciously designed space, by Darlinghurst studio Tom Mark Henry, which was made to feel like a "rabbit warren" that you could lose yourself in. Split into several rooms, including a lounge, dining area, wine bar and private room, the restaurants seats about 120 all up. Expect lots of velvet (both drapery and furnishings), along with dark timber veneer, herringbone floors and plush leather lounges — aka all those vintage steakhouse feels. Linking the space back to its home shores is the ornate wallpaper, which depicts native Australian flora and fauna.

Overseeing the menu, which has its own notable throwbacks, is Bistecca Head Chef Pip Pratt. Taking inspiration from supper clubs and steakhouses, the menu heroes one dish: the Riverine black angus rib eye. Here, it's done three ways: chargrilled on-the-bone, a classic prime rib roast in either English cut (300 grams) or Gidley cut (700 grams) and a hard-to-come-by spinalis steak. To finish your steak off, douse it in your choice of green goddess, confit garlic mustard or truffle, mushroom and burnt butter sauce. 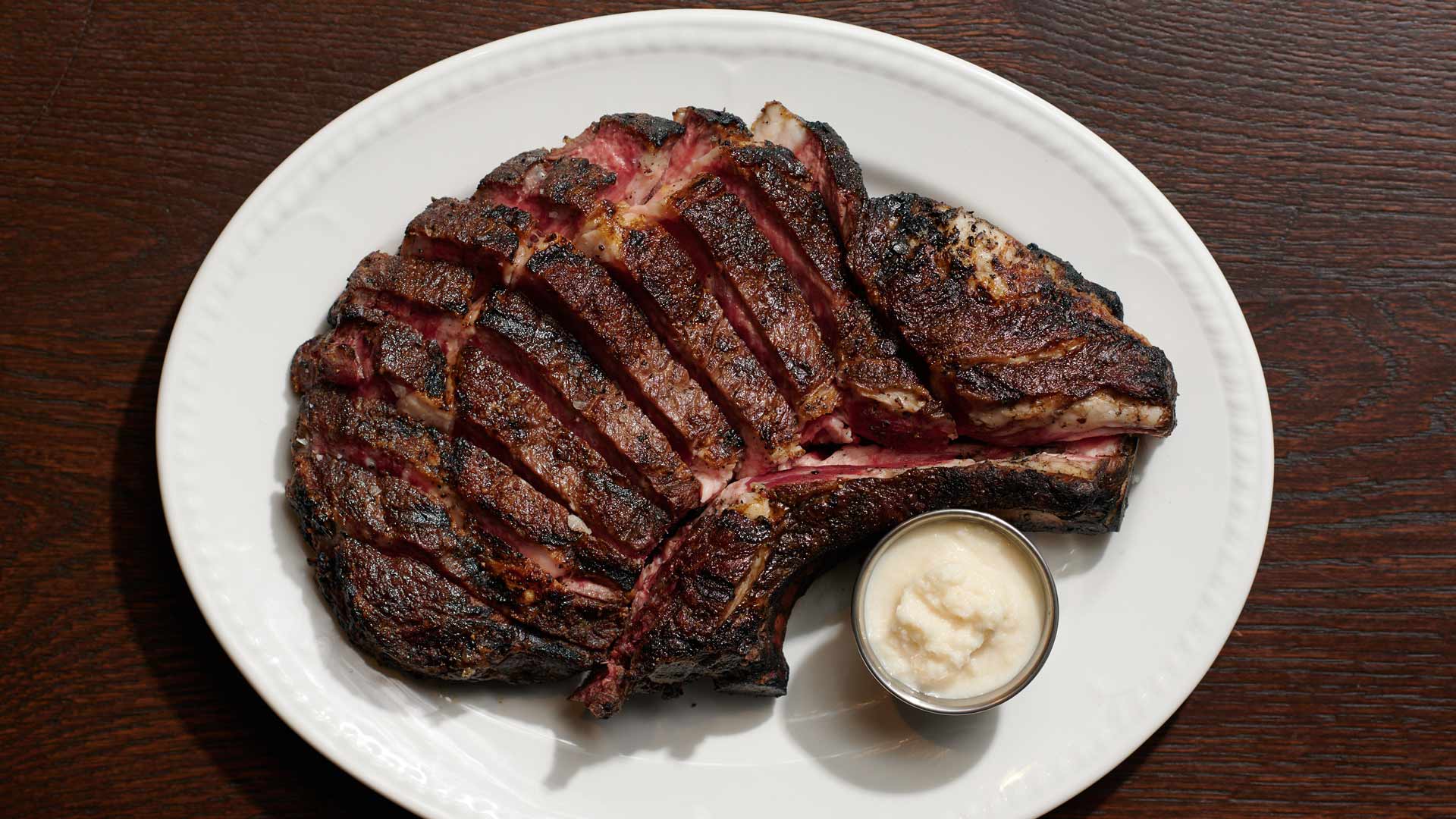 While the rib eye is the star of the show, unlike Bistecca, steak isn't the sole dish vying for your attention here. Other mains include whole grilled flounder with butter and lemon, brick chicken in a good old-fashioned British bread sauce and a savoury pumpkin pie that's layered with whipped goat's cheese and better resembles a lasagna. It wouldn't be a traditional steakhouse without a burger, either — this one has a double beef patty with cheddar, pickles and optional bacon and egg.

There's also a raw bar serving up the likes of oysters, caviar and prawn cocktails for starters, plus heaps of sides and salads — expect mac 'n' cheese, potato gratin and caesar salad sit alongside broccolini with braised leek and shaved brussels sprouts. Desserts come with a bit of nostalgia, too, with the likes of pecan pie, raspberry cheesecake and bowls of chocolate and eucalyptus ice cream. Prefer drinking your desserts? Order the banana split old fashioned cocktail with ice cream-washed Jack Daniels and salted maple syrup.

Since no steak is complete without a good glass of red, there's, thankfully, plenty of that. The extensive wine program is looked after by Bistecca's award-winning sommelier Alice Massaria, with the 13-page list featuring many well-made drops from many well-known brands, many of which are bio-dynamic and sustainable. Massaria's list also shines a light on female winemakers, with a special focus on Vanya Cullen of Cullen Estate.

Bartender extraordinaire Jonothan Carr (Archie Rose, Kittyhawk, Door Knock, Burrow Bar) is pouring a "straight and stiff" array of batched and bottled cocktails. Expect all of your usual suspects and more creative options, including negronis for two and martinis served on silver trays. Other house specialties include toasted chamomile spritzes and a banana split old fashioned.