Just when we thought we'd done all the swimming there is to do in Sydney, we make new discoveries. After paddling under waterfalls, throwing ourselves into extraordinary swimming holes and plunging into ocean pools by the moonlight, we're now exploring rivers. It turns out that some of the best national parks near Sydney are also home to many of New South Wales' top-notch swimming spots. Think turquoise swimming holes, cascading waterfalls, calm creeks and rapid rivers — with plenty of hidden gems thrown in there. With summertime just around the corner, make like Huckleberry Finn and get yourself to one of these meandering beauties. Berowra Creek starts around Pennant Hills and flows northwards, until it joins forces with the Hawkesbury. It's not actually a creek in the strict sense of the word, but a drowned river valley estuary. So, at many points, it runs through steep, majestic gorges. For a dip, make your way to Crosslands Reserve. If you want to stay the night, take a tent and pre-book a camping spot there. The grounds also offer free barbecue facilities, bookable picnic shelters and is an access point to the The Great North Walk via the Benowie Walking Track. Just south of the Audley Boatshed in the Royal National Park (a brilliant spot for kayaking, by the way), a tributary runs into the Hacking River. Known as Kangaroo Creek, it begins in the park. To reach the best swimming spots, take the Karloo Walking Track, a five-kilometre walk which starts at Heathcote Station. Karloo Pool is the most popular — the round swimming hole offers pristine, turquoise waters fed by the cascading waterfall above. If it's busy, make tracks downstream, where you'll find more pools to explore. You can enjoy a picnic here, or mosey onward to Uloola Falls. If you have the time, continue on through the Uloola Walking Track, which finishes at Waterfall Station. Stretching from Ku-ring-gai Chase National Park's southeastern corner and flowing into Pittwater near Church Point, McCarrs Creek has quite a few enviable spots to go for a swim. A road follows it much of the way, making it easily accessible by car. But for safe, shallow waters, head to McCarrs Creek Reserve, where a series of fun swimming options await you at The Duck Holes. Surrounded by bush, this secluded destination is located just off of West Head Road along the trail to the lookout. If you're keen to splash about under a waterfall while you're in the area, don't miss the nearby Upper Gledhill Falls. This is not just a river — it's a river with rapids. To get in on the action, start off along the Nepean River Walking Track. The 1.8-kilometre loop begins in Glenbrook and takes you through rainforest, narrow canyons and steep descents before arriving down at Fairlight Gorge. After your swim, relax over a picnic, soaking in the views of the spectacular escarpment. But be sure to bring along a hearty lunch before the steep climb back out. Afterwards, continue on to the Bennets Ridge walking track or camp overnight at the Euroka campground. We like this gorge so much, we included it on our list of Sydney's ten most unusual swimming holes. 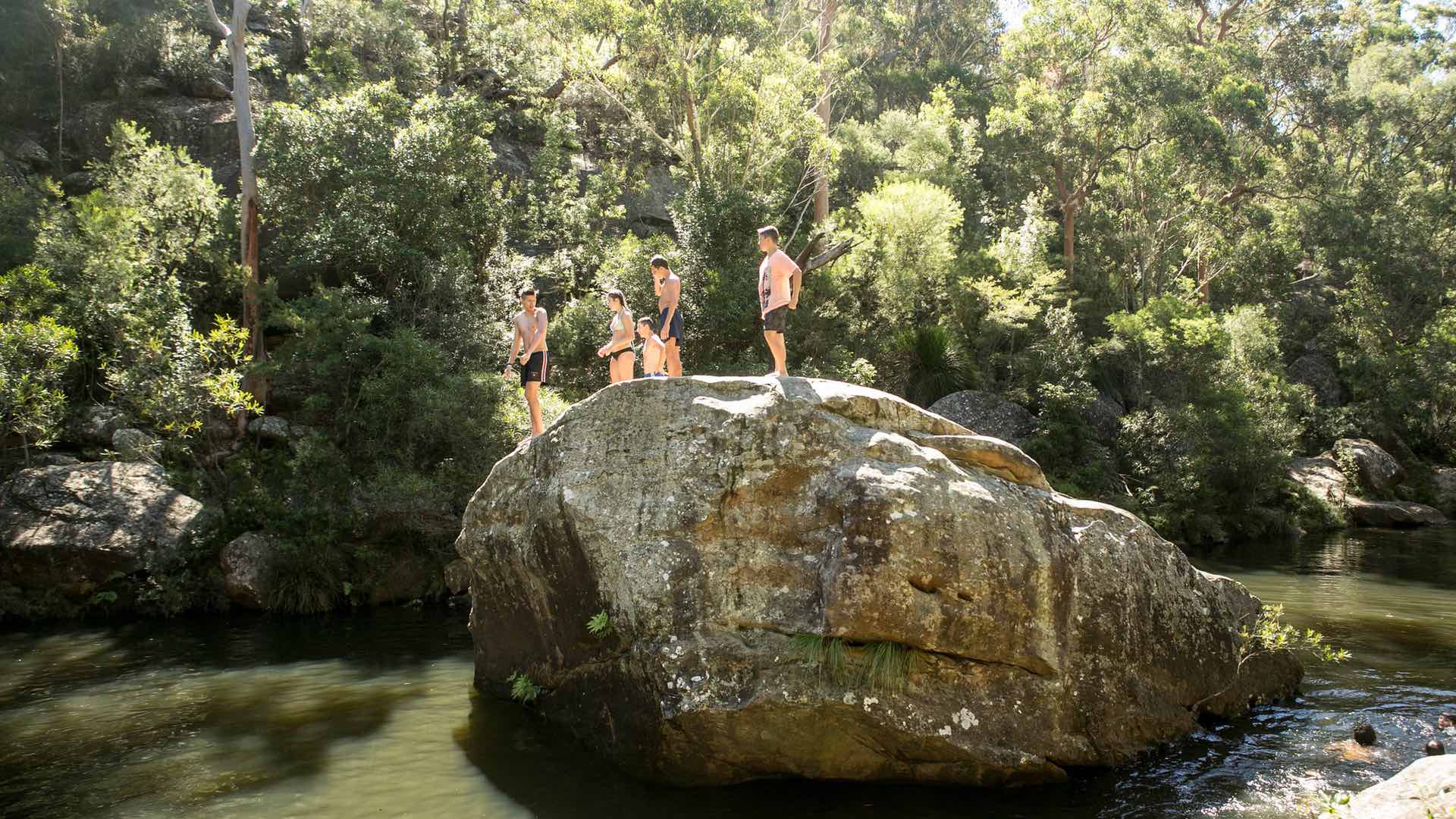 Glenbrook Creek's 17 kilometres begin in the Blue Mountains National Park — five-kilometres southwest of Linden — and end where the creek runs into the Nepean River. Head to the lower reaches to find Glenbrook Gorge, where there are two cracking swimming holes: Blue Pool and Jellybean Pool. To reach these, you can choose your own adventure (and difficulty level). The vigorous, rock-hopping gorge track spans three kilometres and is the most difficult among the three. Then there's the challenging-yet-quick Blue Pool track (only half a kilometre) or the cruisy Jellybean track, which is an easy one-kilometre return. The epic 74-kilometre Kowmung River runs through both the Blue Mountains and Kanangra-Boyd National Parks, passing some of the most rugged scenery in New South Wales. It's one of only six waterways in the state to be officially known as a 'wild river', which means that it's still in near-perfect condition. It also means that you'll need to make your way to it on foot (the lack of cars has played a major role in keeping the Kowmung clean). The good news is you can expect to meet brush-tailed rock wallabies, stuttering frogs and south-eastern petal tails along the way. And of course, finish up with one of the most pristine swims our state has to offer. For a river that runs through residential areas, the Woronora is surprisingly clean. It's ideal not just for swimming but also for boating, canoeing, fishing and heaps of other water sports. To explore thoroughly, hire a kayak from the Woronora Boatshed. Otherwise, you can walk or drive in at various points, including Prince Edward Park, which is about 30 minutes on foot from Sutherland Station. Another great spot is The Needles, a freshwater swimming hole above the Woronora. To get there, drive to the northern end of Woronora Road, where a gate down to the water is waiting. Set at the start of the Royal National Park, the mighty Hacking River runs between Sydney's southernmost suburbs and Bundeena. One of the loveliest places to swim along it is off Swallow Rock Reserve, at the end of Swallow Rock Drive in Grays Point. Don't forget to pack some eats to chuck on the free barbies for a post-dip feast. East of Grays Point, the river officially turns into Port Hacking, where heaps more swimming is on the docket — including netted pools at Gymea Bay Baths Reserve and Lilli Pilli Baths, as well as four beaches at Bundeena. Nayook Creek's most famous — and most swimmable — stretch is Deep Pass Canyon. Found at Newnes Plateau, right on the brink of the Wollemi National Park, it's home to several deep pools which are dotted with fairy-like ferns and cascades — they look like scenes straight out of the Lord of Rings. They're also right near some of New South Wales' most beautiful campsites — including the Newes campground. The hike in and out is around a two-kilometre circuit and the water is on the cool side, so prepare for a refreshing plunge.

Published on September 10, 2020 by Jasmine Crittenden