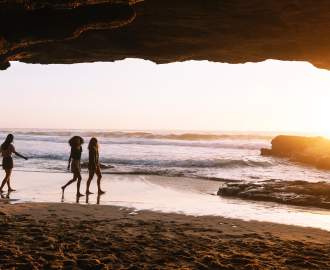 Would you go camping more if you didn't have to buy the whole tent, mattresses, camping chairs set-up? Would festivals be less likely to have to deal with people ditching their tents at the end of a festival, if they simply had to return the whole thing? Meet the new Sydney start-up killing two birds with one stone — getting you into the great outdoors, saving you money and minimising waste while they're at it.

Sydney-founded company CampNow will hire and deliver the camping equipment you need for a weekend away in easy packages, and you can choose the level of camping gear to match your adventure — whether you're going hard at a camping music festival or escaping down the south coast. The idea behind CampNow came from two Sydney mates, co-founders Nick Longworth and Dan Courtnall, who genuinely wanted to see people get off their phones and back into the great outdoors — they just wanted to make that process a little more carefree.

"Why should you spend all your time and money on camping equipment before you have even begun your adventure?" says Nick and Dan. "Too many of us are constantly hooked into our phones, stuck in the rat race and forget the beauty that is only a short trip away. Our goal is to help you break your routine, take some time and go on an adventure."

"After a heavy month of work I was feeling burnt out and wanted to do something different on my weekend and go camping, but it was also a bit hard as I didn't own any gear," says Dan. He didn't want to borrow, buy or clean any gear, he just wanted to hire some gear for the weekend and have it delivered, but there was no offering out there. So Dan contacted his buddy Nick (a keen camper) and pitched a grand idea to him.

CampNow is brilliantly simple: the guys deliver (and pick up) everything you need for camping for a truly reasonable fee — there's less waste at camping grounds and you don't have to fork out for camping gear you'll never use again. Likely to be the most popular of the packages is the 'Festival' set-up. For $100, you and a friend can rent everything you'd need for a camping festival: high quality tent, queen air mattress, two chairs, 36-litre esky, tarp, headlamps, first aid kit. Best bit? They'll deliver and pick up the goods to your work or home in Sydney. Splendour, Secret Garden, Meredith, sorted. If you're keen for a weekend away, the 'Just Go' and 'Want More' packages are for you. Then there's the big kahuna, the 'Take the Kids' for $399 for four people for two nights.

Now, where to start? Dan and Nick let us in on their favourite camping spot near Sydney. Ready? Treachery Camp in Seal Rocks. It's just 3.5 hours out of Sydney, a "quiet national park surrounded by amazing landscapes and epic waves" according to the guys. Now you have zero excuses. Hook up a CampNow package and head for Sydney's best camping getaways.

Published on February 05, 2016 by Shannon Connellan