A Weekender's Guide to the Upper Blue Mountains

There's more to the Blueys than the Three Sisters — explore Leura, Blackheath and Mount Victoria for cafes, cinemas and epic hiking trails.

A Weekender's Guide to the Upper Blue Mountains

There's more to the Blueys than the Three Sisters — explore Leura, Blackheath and Mount Victoria for cafes, cinemas and epic hiking trails.

Many a traveller to the Blue Mountains doesn't get beyond the Three Sisters and the Scenic Skyway. These things are worth a good gawk, but, if you're seeking more adventure, then skip over Katoomba for less obvious nearby destinations like Leura, Blackheath and Mount Victoria. As the Great Western Highway winds deeper and higher into the mountains, the villages become tinier and less touristy. Along the way, you'll come across a mechanic's garage that's been turned into an eco-friendly restaurant, a 19th-century terrace fit for a great novelist and a cinema from the 1930s. Add internationally awarded cider made from locally grown apples and a glow worm tunnel — among other surprises — and you've got one hell of a weekend.

While regional holidays within NSW are allowed from June 1, some of the places mentioned below may still be closed due to COVID-19 restrictions. Please check websites before making any plans. If you're making tracks from Sydney, then your first stop should be Leura (around two hours west of the CBD), known for its cherry blossom-filled main drag and cute boutique shops. In 2007, restaurateur James Howarth bought a mechanic's business here and transformed it into a clean, green eatery called Leura Garage. We're talking a ten-kilowatt solar power system, a 22,000-litre rainwater tank and a composter that can chew through 200 kilograms of waste per week. Plus, instead of bringing in fancy furniture, Howarth used what was already about, transforming the car hoist into a bar and a bunch of tyres into a dividing wall. Locally sourced produce features in share plates — such as 12-hour braised lamb shoulder with pomegranate glaze, confit garlic and rosemary — and mains, including the pork sausage wheel with crispy potatoes, caramelised onion and sauerkraut. The wine list is big on drops from Orange and Mudgee. Drive west for another ten minutes to reach the Hydro Majestic Hotel in Medlow Bath. Set up in 1904 by eccentric businessman Mark Foy as a glamorous health retreat, the heritage-listed Hydro is famous for its unusual blend of art deco and Edwardian architecture, as well as its casino dome, which travelled to Sydney from Chicago over sea, before being loaded onto a bullock train and dragged to its current position. During the past decade, a $30-million revamp by the Escarpment Group has restored much of the hotel's former fanciness. It's easy to spend several hours on high tea in The Wintergarden restaurant, where expansive windows look over Megalong Valley. Alternatively, pop into the Boiler House Restaurant for pizzas and burgers or sink into a plush couch in the Salon du The for a cuppa.

Rather than heading home the way you came, turn your journey into a loop, by taking the Bells Line of Road, which returns to Sydney via the northwestern suburbs. That way, you'll get to visit Bilpin, a rural town, well-known among foodies for being home to a farm belonging to Sean Moran (of Sean's Panaroma on Bondi Beach) and for its delicious apples. Here, third-generation farmer Shane McLaughlin and his partner Tessa have been making Hillbilly Cider since 2007, using local fruit — and local fruit only. Head into the shed, prop yourself up at the bar or grab a chair overlooking the orchard and run through a tasting, beginning with the too-easy-to-drink apple cider, which won bronze at the 2015 International Cider Challenge, and finishing with Sweet Julie, the only cider on the planet made from the Julie apple, a variety discovered on the property.

If you're looking for a bite to eat in Bilpin, pop into Bilpin Afire for hearty dishes driven by local produce, such as woodfired pizzas and Lithgow lamb dishes. Meanwhile, just ten minutes east, in Kurrajong, there's Lochiel House, where you'll find classics with an Asian twist, including salt and szechuan pepper squid, barramundi in a green curry sauce and steak tartare with prawn crackers and fried shallots. Any weekender in the Blueys should involve a walk. For a classic experience, stroll from Leura Cascades to Echo Point along the Prince Henry Cliff Walk, passing several exhilarating lookouts on the way. Even more spectacular vistas are at Evans Lookout in Blackheath, which is the starting point for a three-kilometre clifftop walk to Govetts Leap. Or, to add some history and art to your visit, have a wander around Hartley Historic Village, where you can sleepover in a 19th-century sandstone cottage and watch sculptor Ron Fitzpatrick transform metal and glass into dazzling creations at Talisman Gallery.

To see his works in a different environment, pay a visit to Everglades, a 5.2-hectare garden created in the 1930s by Danish-born gardener Paul Sorensen. Like many grand European gardens, it's a dreamy maze of winding pathways, tranquil pools and idyllic picnic spots under majestic trees. But, unlike many European gardens, it affords extraordinary views of Australian wilderness. By far and away the best way to get to and from Everglades is in an open-topped 1920s car with Blue Mountains Vintage Cadillacs.

Come nightfall, it's glow worm time. To meet a bunch without having to put up with noisy crowds, book an adventure with Blue Mountains Glow Worm Tours. Your tour guide will meet you at a private property, then lead you along a rustic track, across footbridges and over boulders, before descending into a cool, mossy canyon. As soon as you catch your breath, you'll see that you're absolutely surrounded by glow worms. Along the way, learn all about how the little critters work — including why you shouldn't shine a torch in their faces — and, if you're lucky, see one up close.

Another option is catching a film at Mount Vic Flicks, a 1930s-style cinema in the village hall. Local couple Kirsten Mulholland and Adam Cousins bought this magical, nostalgic business in 2014 to save it from extinction. Films vary from classics to new releases, the choc tops are homemade and steaming mugs of soup are served throughout winter. 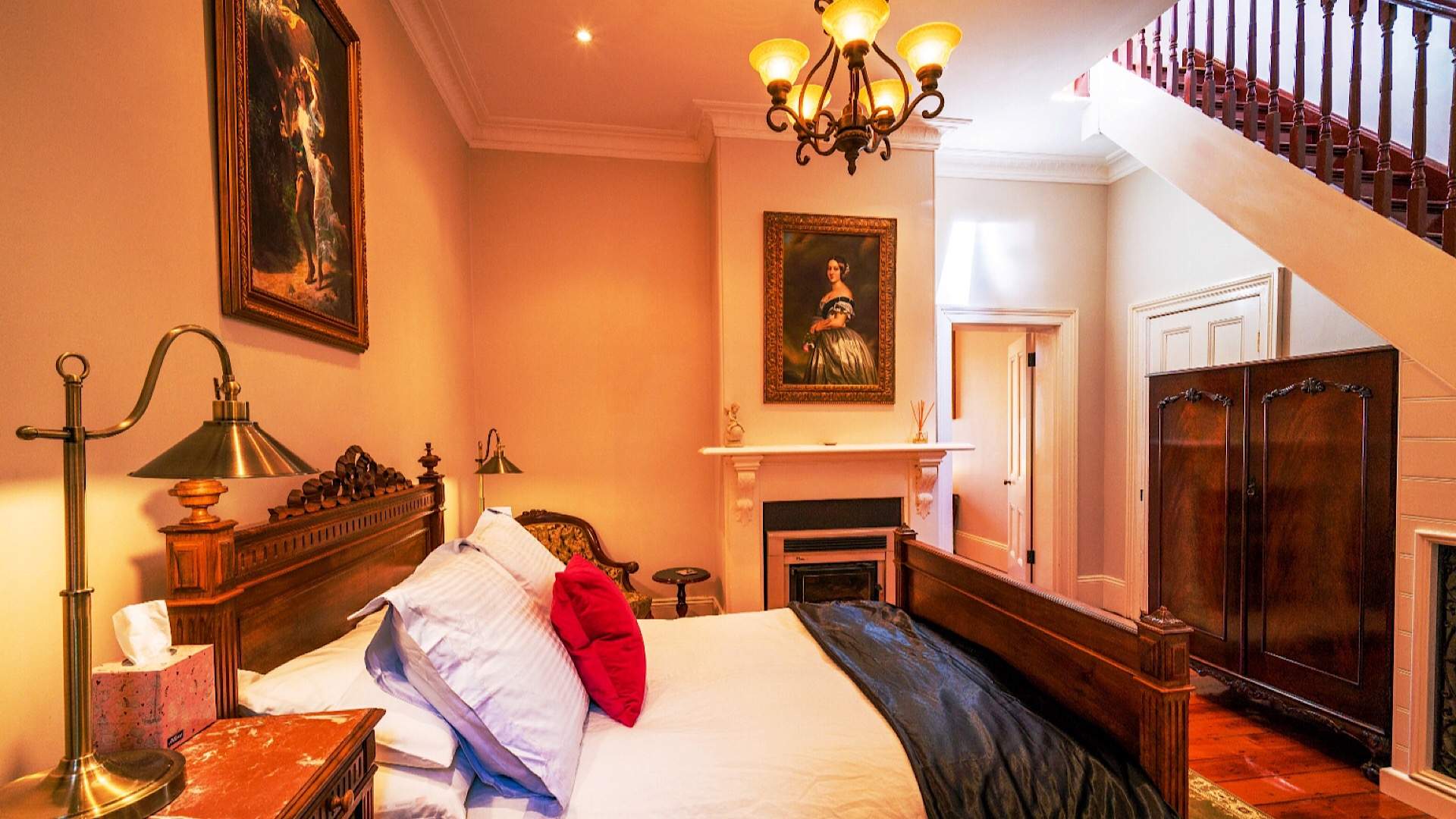 Just around the corner from Mount Vic Flicks is Bank House, a beautiful, three-storey Victorian terrace, which owner Jeff Jones spent a year and a million bucks restoring and renovating. Think crackling open fireplaces, claw-foot baths, antique writing desks, private libraries and hardwood beds covered in top-quality linen. The feel is authentic and cosy, yet fresh and new. Plus, a bunch of conveniences are in place to connect you with the 21st century, including Nespresso machines, state-of-the-art sound systems and televisions with Netflix. If you don't feel like going anywhere (from our experience, you won't), Jones will cook you dinner and brekkie, and deliver it to your door. In warm weather, eat on the back deck, which overlooks landscaped gardens, complete with gazebo, fire pit and barbecue.

Meanwhile, in Blackheath, there's Parklands Country Gardens and Lodges. Book a Garden Suite and you'll spend your weekend lolling about in an ultra-comfy king-sized bed, pottering around a private garden patio in a luxe bathrobe, blissing out beneath a rainforest shower and warming up before a gas fireplace. Buffet breakfast is served in a light-filled dining room and there's a day spa with freestanding hot tubs overlooking Parklands' 28 acres of landscaped beauty through floor-to-ceiling windows.

Published on May 29, 2020 by Jasmine Crittenden