Pack a tent, water and lots of snacks and walk your way through the most beautiful parts of NSW.

Pack a tent, water and lots of snacks and walk your way through the most beautiful parts of NSW.

Whether you want to escape for a few days, challenge your stamina levels, mull over a tough philosophical question or get to know New South Wales up-close, there's no better way to do it than on a long-distance hike. Without leaving the state, you can follow a 100-year-old horse trail past waterfalls and ancient Aboriginal sites, walk through one of Australia's deepest gorge systems, immerse yourself in coastal wilderness discovering secret beaches and stroll alongside a mighty river surrounded by national park. If you're more in the mood for an urban environment, stick close to home and take a wander along the Palm Beach to Manly track. Here are five epic multi-day hikes to try near Sydney. How long? Three to four days.

If you're keen to get in a few days of walking, but don't care for hitting the highway, conquer this majestic 35-kilometre-long trail right here in Sydney. It travels along the world-famous beautiful coastline of the northern beaches from Palm Beach (about 50 kilometres north of the CBD) to Manly, passing wild surf, windswept cliffs, tranquil bays and untouched bushland. And yet a decent coffee, craft beer or hatted restaurant is never too far away. Do the whole thing in one fell swoop, staying in hotels or campsites as you go, or dip in and out via a series of day trips. If, on making it to Manly, you're not ready to retire, keep following the trail to Cronulla, which is 94 kilometres from where you started. How long? Two to three days.

This rugged, 45-kilometre-long adventure begins in Katoomba (about 100 kilometres west of Sydney CBD) and travels through ancient rainforest, friendly woodlands and pretty heathland, before finishing up at Jenolan Caves, which, at 340 million years, is one of the oldest cave systems in the world. Along the way, you'll meet numerous waterfalls and raging rivers, visit the last recorded site of the Gundungurra corroboree, pass through Megalong Valley, cross Bowtells Swing Bridge and climb up Mini Mini Saddle for panoramic views. There are several campgrounds, including Old Ford Reserve, Cox's River, Black Range and Allum Creek. Keep your eyes peeled for wildlife, especially echidnas, wombats, kangaroos and wallaroos. Back in the late 19th century, the Six Foot Track was a thoroughfare — albeit on the gnarly side — for horses. How long? Five to six days.

The Hawkesbury Track is one section of the Great North Walk, a 250-kilometre-long trail that starts in the middle of Sydney and winds up in downtown Newcastle. Your starting point is Berowra Waters (about 40 kilometres northwest of Sydney CBD), which means you can arrive by seaplane and kick off with a degustation at Berowra Waters Inn. From there, the track winds for 78 kilometres, bringing you spectacular vistas of the Hawkesbury River, stunning rest stops like Jerusalem Bay and swathes of Ku-Ring-Gai National Park. On reaching Brooklyn, a village on the Hawkesbury, you'll need to jump on a ferry, before continuing through Brisbane Waters National Park to pretty, bucolic Somersby. There are seven camp sites along the way, as well as bricks-and-mortar accommodation here and there. How long? Two to three days.

To really escape the big smoke, make it your mission to complete the Light to Light Walk, on the Far South Coast. This 30-kilometre journey begins at Boyds Tower — about 35 kilometres' drive south of Eden, which is about 500 kilometres south of Sydney — and finishes at Green Cape Lighthouse, hugging the coastal border of Ben Boyd National Park. Expect empty beaches, roaring surf, whale sightings and a general sensation of being a gloriously long way from anywhere. There's a couple of campgrounds en route and, if you want some comfort to look forward to, book a night at Green Cape lightkeeper's cottages, which come with claw foot baths and open fires. 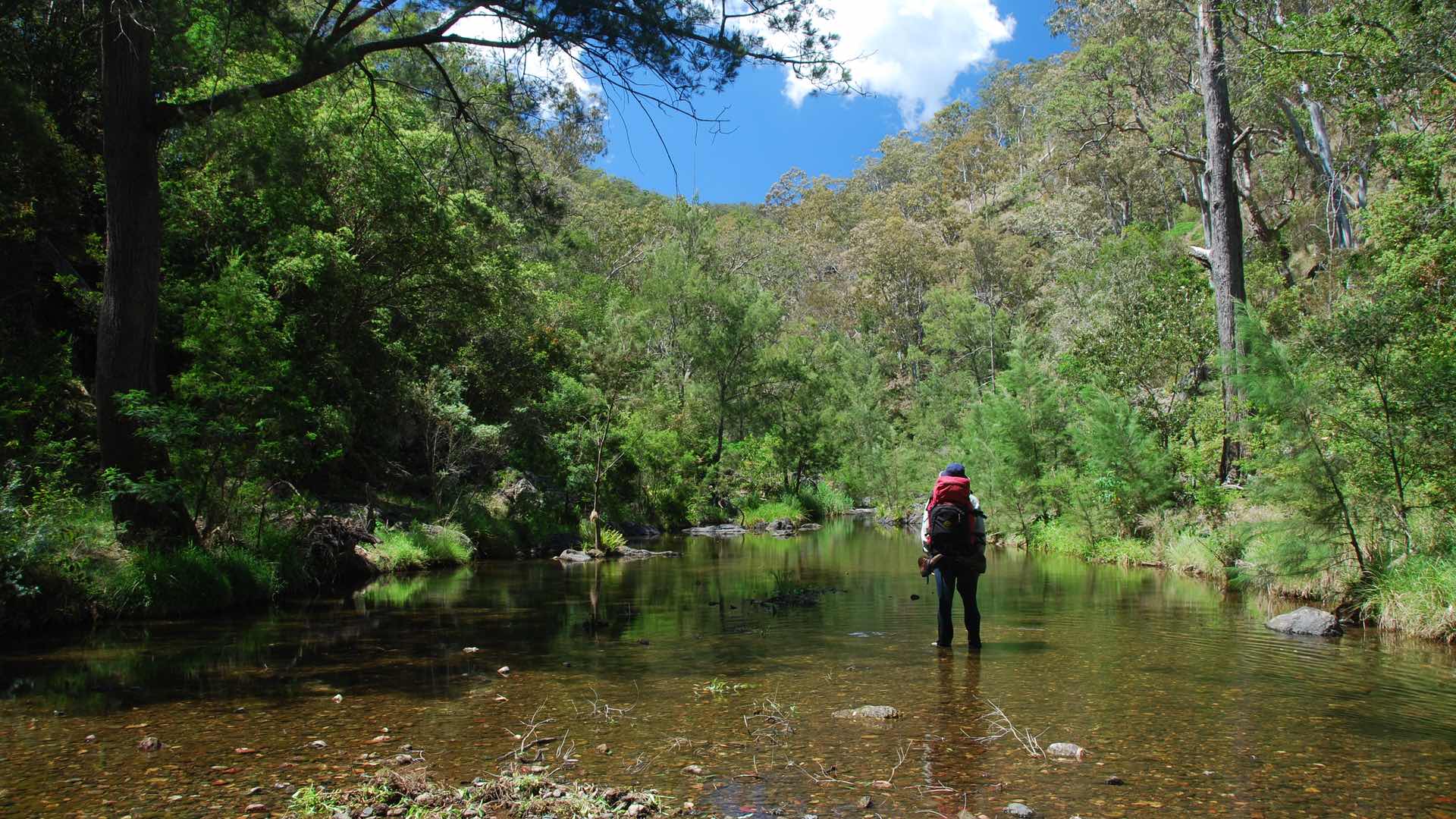 How long? Three to four days.

Another escapade that will put plenty of miles between you and traffic jams is the Green Gully Track in Oxley Wild Rivers National Park, about 200 kilometres northwest of Port Macquarie and 600 kilometres north of Sydney. This 65-kilometre loop travels into the depths of the Apsley-Macleay Gorges, which are among the biggest in Australia. You'll also come across pristine mountain streams, lush gullies crowded with ferns, magical forests and awe-inspiring rock formations. The park is packed with wildlife too, so look out for wedge-tailed eagles and brush-tailed wallabies, and endangered species. You won't need a tent: accommodation is provided in the form of renovated stockman's huts, complete with beds, solar-powered lighting, rainwater, cooking gear and toilets. Just make sure you book in advance.