From islands with dreamy Sydney Harbour Bridge views to secluded slices of paradise, these jaw-dropping spots will level up your next al fresco feast.

Dust off the wicker basket, roll out the plaid blanket and ignite the group chat, because you can finally hang with four (fully vaxxed) people. That's right, baby, picnic season is back and you know what that means — there's a menu to curate, a playlist to mix and a friends' reunion that's, dare we say, even better than the HBO special on Binge.

For those living in Sydney's eastern suburbs, we've teamed up with Rosie Spritz to put together a handy list of our favourite picnic spots where you can BYO booze and have a merry ol' time. Whether you're after dreamy city views, secluded slices of paradise or harbour beaches where you can go for a dip before you tuck in, you'll find it all eastside. Ah, Centennial Park. The green meeting place of the east uniting runners, rollerbladers, frisbee enthusiasts, cyclists, sunbathers, lunch-breakers — and soon, picnickers en masse — in one lush, leafy parkland. Arguably one of the better known parks in Sydney, it boasts 189 hectares of native bushland and rolling green hills, and it's home to countless species of local wildlife. Due to its size, there are amenities all over the place and even on its busiest days, you'll find a grassy patch to spread out the picnic blanket with your four vaxxed pals. Plus, Centennial Park's proximity to Oxford Street means there's a long list of worthy eateries currently serving to-go options, such as The Paddington and its on-site takeaway chook shop, and top-notch cafe-deli Alimentari. An island getaway of a different kind, Boowambille — also known as Shark Island — is situated between Point Piper and Vaucluse, but feels blissfully miles from civilisation. It has over 1.5 hectares of green space, and there are picnic shelters, a stately gazebo and grottos dotting the foreshore which were handbuilt back in the 1900s. It's truly a spot that'll have you saying 'how's the serenity' with its 360-degree harbour views, including a bang-on line of sight to the Harbour Bridge. There is a landing fee of $7 per person, which is nothing when you consider the million-dollar vistas. Plus, you can legally sip booze here — so cooler that Rosie Spritz, stat. You'll just have to take all your rubbish with you when you're done. Shark Island Wharf is undergoing repairs till September 22, so you can soon hop on the weekend ferry service or arrange a private vessel to drop you off and pick you up if you want to be extra fancy. Feeling adventurous? Hire a kayak from Rose Bay or Point Piper and paddle your way there. 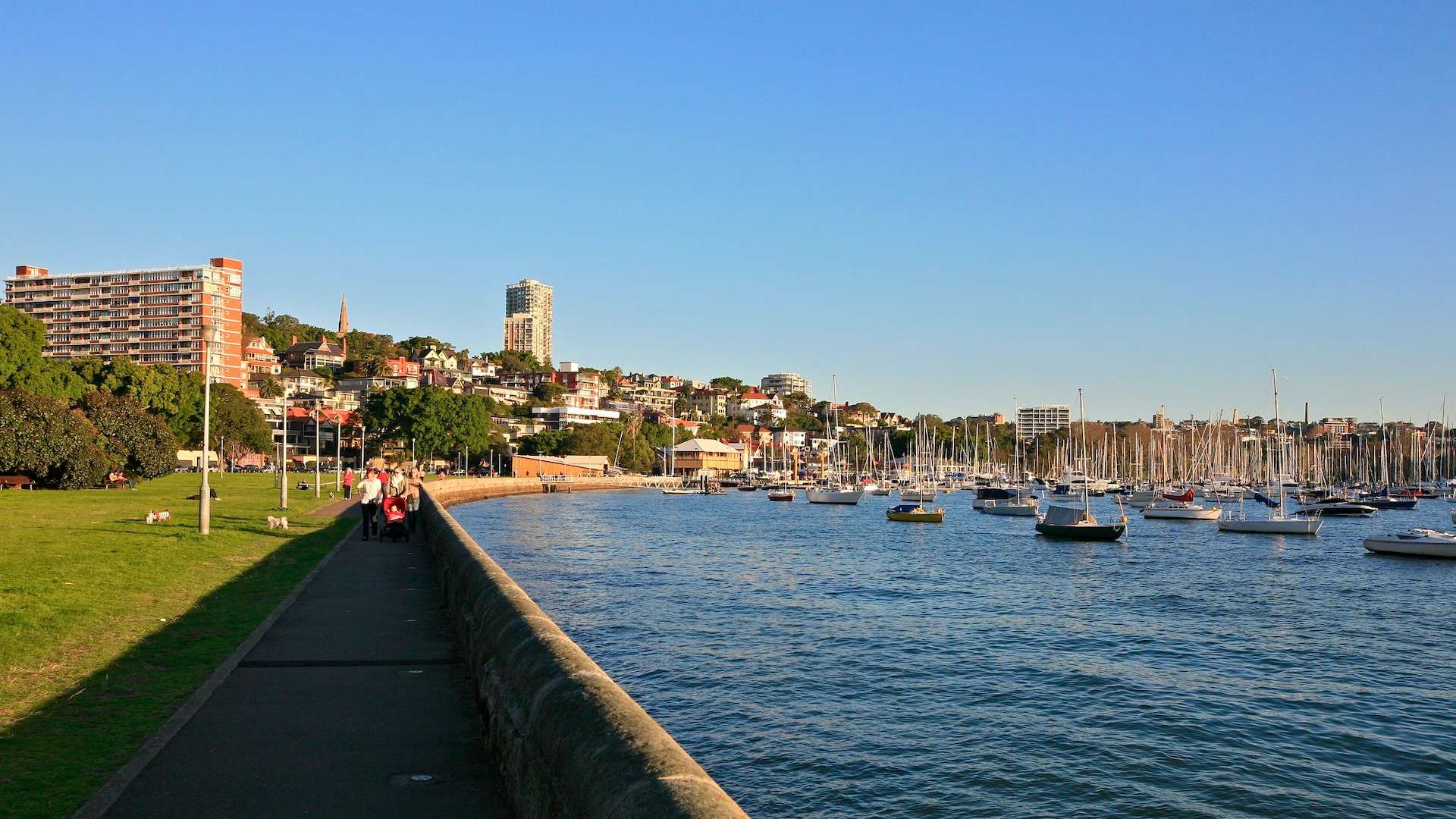 When you're not crushing Strava PBs around the foreshore, Rushcutters Bay Park is both a pleasant and convenient place to host a weekend picnic. The park's relaxed off-leash rules means you can bring your four-legged friends along, too, and it's a stone's throw from a handful of legendary food spots in the east (and a giant Woolies, if self-catering is more your picnic flavour). Despite the morning rush of runners, it's fairly easy to find a space to yourself, and while parking can be a bit of a punish (as is tradition in the eastern suburbs), it's only a brisk stroll from both Edgecliff and Kings Cross stations. Sit by the water, sip a spritz with your besties, and take in the enchanting bay view and breezy sailboats gently swinging offshore. Nestled behind Murray Rose Pool (formerly Redleaf Pool), Blackburn Gardens is a historic park surrounded by towering tropical gardens and features an out-of-this-world view of Sydney Harbour. Despite being just off the main drag of Old South Head Road, you'll feel like you've been whisked away to a peaceful garden paradise. Again, parking can be tricky here — the streets surrounding are residential and narrow AF — so plan accordingly. Though it's now quite well known among the summer crowds, Blackburn Gardens still has an inexplicable air of feeling like you've discovered an untapped picnic gem. Bag your swimmers and go for a splash pre-picnic, then kick back on the grass and watch boats cruise across the harbour as the afternoon dips. If you're looking for the real eastside experience, you'd be hard-pressed to find better than Parsley Bay Reserve. Tucked inside an enchanting cove in Vaucluse, the bay boasts a naturally levelled park and its beach eases into one of the most dazzling bays this side of the bridge. If you're planning a leisurely dip before you snack and sip, you can take solace in the fact that the bay is cordoned off with a shark net for a fin-free swim. And, unlike other bays dotting the area, there's a small car park with ample space available (so long as you get there before the late-morning rush). If you're the picnicking type who can't sit still, there's a bushland trail to explore and a spectacular walkway bridge that spans Parsley Bay to help you capture the perfect post-picnic shot, too. Small in size but big in beauty, McKell Park is tucked away at the tip of Darling Point — though, with a wharf right in front, getting here is relatively simple. It's the kind of local-vibes spot where you want to spend all morning at, debriefing on the week with your bestie over a coffee. Or perhaps you'd rather take a picnic blanket and the latest can't-put-it-down read and while away the afternoon solo. There are no bad ideas, especially with McKell Park's waterfront locale. With plenty of leafy cover to cool off under and the twinkling, light-dappled water turning up the charm, you'd almost forget that its vantage point out across the harbour is in a league of its own. When Sydney turns it on with another glorious sunny day, and you're in the mood for a scenic walk, we've got just the thing. The Federation Cliff Walk joins Dover Heights with Watsons Bay via a raw, rugged and generally pretty crowd-free five-kilometre route. It's the perfect accompaniment to a picnic at one of the most scenic patches of grass in Sydney — Dudley Page Reserve. Boasting what can only be described as jaw-dropping views of Sydney, this bright and breezy spot has the feeling of being up in the clouds. Whether you're the type who wants to picnic after they've worked up a sweat or would rather burn off those finger sandwiches with an evening stroll, this is one picnic spot that can't be beat.

Rosie Spritz is an ideal springtime sip and is available at BWS, Dan Murphy's and First Choice Liquor stores across Sydney. For more picnic inspiration, check out our guides to idyllic picnic spots where you can BYO booze in Sydney's inner west, inner city, lower north shore and northern beaches.