Giant watermelons, potatoes and lobsters named Larry might sound ridiculous, and they are — but that doesn't stop them from being among our most loved landmarks.

There are more than 150 Big Things across Australia — from the five-metre high can of Tooheys New that crowns a pub in the outback town of Cobar to the controversial Big Bogan of Nyngan, 190 kilometres northwest of Dubbo. These Big Things have become something of an obsession for Australians — in 2007 Australia Post even promoted them on a series of 50-cent stamps — perhaps for the way they're uniquely Australian, silly and provide a beacon of life on seemingly endless highways through hot, dry, barren country (or, at the very least, a toilet stop). Next time you go a-road tripping, consider paying one of these fantastic gigantics a visit.

Before heading on a road trip or interstate, check the relevant state's COVID-19 guidelines. Dream destination of many a Sydneysiding child is the Big Banana. Found in Coffs Harbour – around 5oo kilometres north of the city – it's the gateway to warmer climes and summer holidays. It's also one of Australia's oldest big things, having been built in 1964. When you're done getting a pic, go exploring the surrounding fun park, which abounds in giant slides, toboggans, ice skating opportunities and real-life bananas. One of the most painstakingly detailed of the Big Things is the Big Lobster in Kingston SE, which you'll find on the South Australian coast around 300 kilometres south of Adelaide. It was the initiative of local lobster fisherman Ian Backler, who partnered with Rob Moyse, to commission builder Paul Kelly to construct a 17-metre high spiny lobster as realistically as possible. After going onto the market in June 2017, the Big Lobster (known to locals as "Larry") was snapped up by pastoralist Tim Brinkworth. Our newest Big Thing is the Big Melon, which dominates a park in Chinchilla, the melon capital of Australia, located 300 kilometres northwest of Brisbane. The Melon was the winner of a competition run by accommodation website Wotif, which asked the Australian people to vote on their favourite submission. Among the other finalists were Glen Innes' Big Kilt (NSW), Mittagong's Big Tulip (NSW) and Kingaroy's the Big Peanut (QLD). Every February, the Chinchilla Melon Festival attracts 15,000 visitors from all over the world. The Big Bench isn't as well-known as many of Australia's other Big Things – mainly because it's all the way out in Broken Hill. But, it's one of the most fun and photogenic. If you've ever wondered how Lilliputiens feel, take a seat. The Big Bench is 2.5 times the size of a normal bench, putting the seat around shoulder height (when you're standing next to it) and making sure your legs are a long way from the ground (when you're sitting on it). It was built in September 2002, as part of Landscapes and Backgrounds, a contemporary public art exhibition. In 1988, country legend Slim Dusty unveiled the Big Golden Guitar, a tribute to Tamworth's obsession with country music. Every January, the town swarms with tens of thousands of folk for the Tamworth Country Music Festival, the second biggest country music festival in the world (after Nashville). The guitar's twelve golden metres of fibreglass and steel tower over the Tamworth Tourist Centre. Head inside to visit a wax museum dedicated to country music stars, a collectors museum packed with Donald Bradman memorabilia and a music shop. If you're looking for more spots to visit in Tamworth, check out our weekender's guide. The Big Merino's hard to miss: not only because of its enormous horns, but also because of the constant stream of vehicles veering off the Hume Highway to bathe in its woolly wonders. 15.2 metres high, 18 metres long and weighing a whopping 97 tonnes, it's one of the biggest of all the Big Things. But that didn't stop the locals moving it 800 metres in 2007, when the arrival of the Goulburn bypass threatened its popularity. Next door you'll find a gift shop peddling an array of merino apparel, from scarves and ponchos to jumpers and socks. 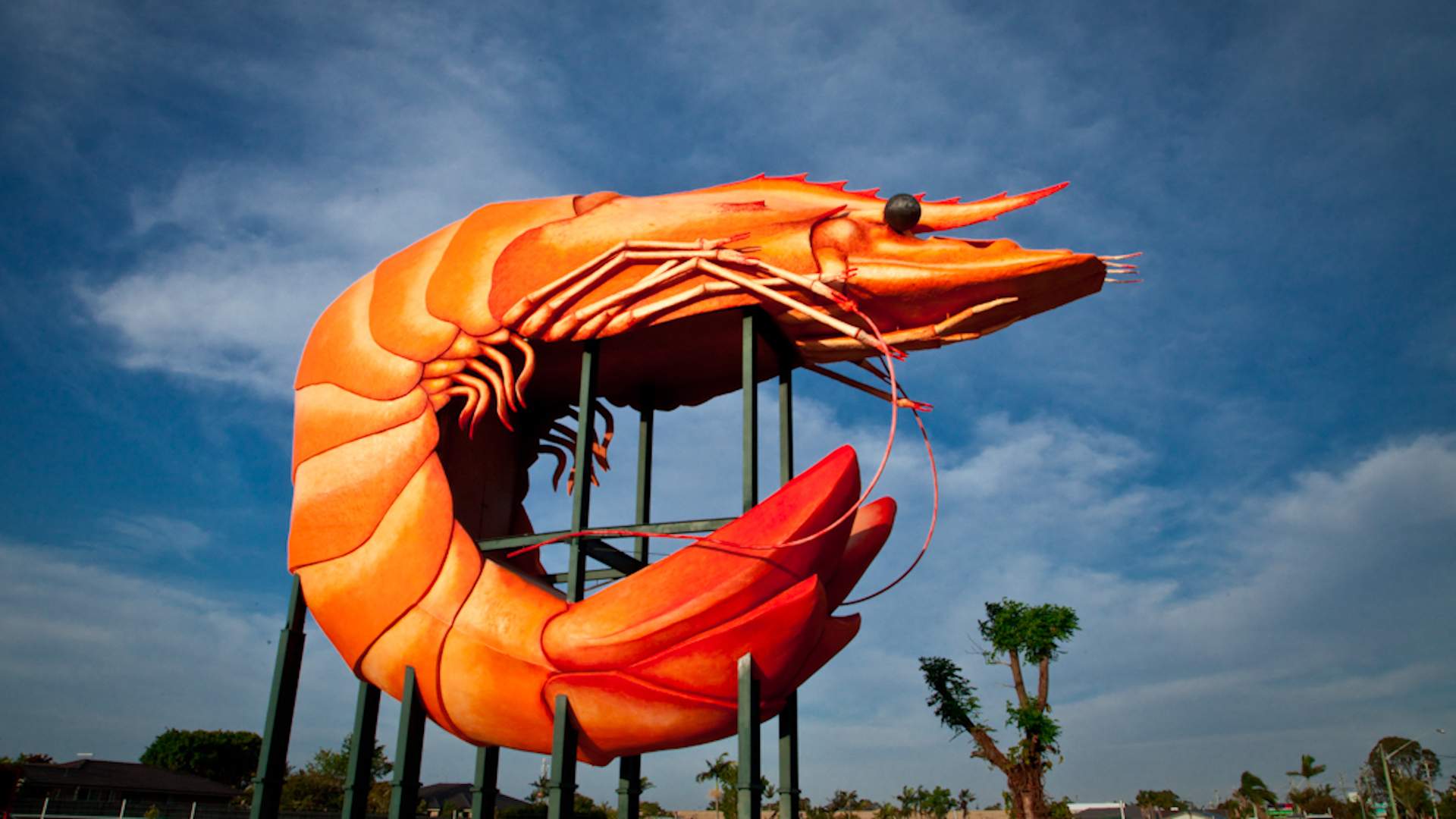 In 2010, the Big Prawn came close to death when the Ballina Shire Council voted in favour of its demolition. However, the public revolted and the motion was never carried out. Today, the nine-metre high crustacean towers in all its bright orange splendour outside Bunning's hardware store, who own the land over which the Big Prawn reigns and revamped it to the tune of $400,000. The original design, built in 1989, allowed you to walk inside the sculpture and climb its internals via a spiral staircase. Those days are well over, though; you'll have to settle for a photo. 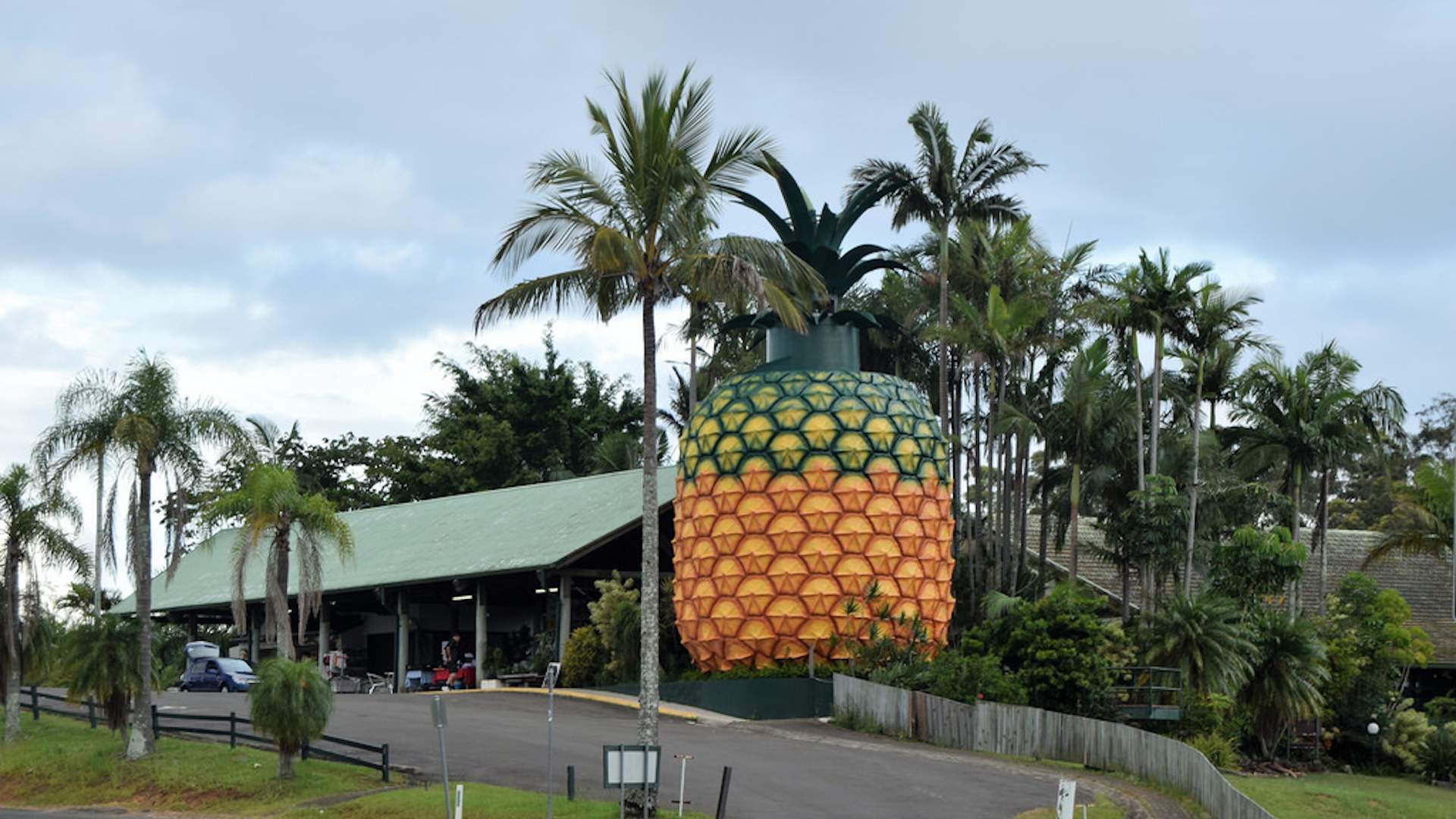 Drive directly west of Mooloolaba on the Sunshine Coast, Queensland, and, after about 20 minutes, the Big Pineapple will loom on the horizon. Built in 1979, it's now a heritage-listed entity. Previous visitors include Charles and Lady Diana. When you're finished Big Thinging, head to the onsite wildlife zoo to meet red pandas and tuck into a pineapple-inspired feast at the cafe. One of the closest Big Things to Sydney is the Big Potato, in the Southern Highlands village of Robertson. We almost lost this beauty back in 2016, when a supermarket owner threatened to buy it – to destroy it and create a parking lot. However, locals Heather and Neil Tait came to the rescue. Unlike so many of the other Big Things on this list, the Big Potato is totally uncommercial. You won't see gift shops, gimmicks or ticket booths. There is, though, a picturesque park, dotted with hedges and daffodils, some of which were planted by local artist Ben Quilty. On a Monday night in February 2014, the Big Mango went missing. The theft was no mean feat, given that the colossal fruit is ten metres high and weighs in at seven tonnes. A Twitterer known as Urban Roo claimed to have found it floating off the Victorian coast, among the Twelve Apostles. However, the next morning, Bob, a local farmer, called ABC Radio to say he'd found it, hidden by tarps and branches, in a nearby paddock. A few hours later, Nando's claimed responsibility. These days, the Big Mango is back in its rightful place, beside the Bruce Highway, four kilometres south of Bowen, near Airlie Beach.

Published on December 24, 2020 by Jasmine Crittenden