Swap the pavement for bush tracks, waterfalls and mountain peaks.

Just an hour or two from Brisbane, you can find a myriad of natural delights spread throughout world-class national parks. From granite boulders and mountain ranges to tranquil rainforests and gushing waterfalls, there's guaranteed to be something for everyone — including when you're trying to make the most of Queensland's hardly frosty winter weather.

One-day walks are a great way to maximise how often you get outdoors, especially when busy schedules get in the way of full weekend getaways. They're also perfect for getting a little nature therapy into your week, without having to carry all that pesky camping gear.

It's amazing where a few hours of hiking can get you — volcano-forged mountain summits and prehistoric rainforests are just the start. So pick one of the below hikes, pack a backpack and head on an daytripper's adventure. Mount Beerwah is the Goldilocks mountain of the Glass House range, a famed series of mountains located one hour north of Brisbane. It's a step up from Mount Ngungun, but less intense than Mount Tibrogargan. The hike to the summit takes three-to-four hours return and requires decent rock scrambling skills. After the initial climb, you'll be ogling Beerwah's distinctive 'organ pipes' — a series of massive granite columns, right before the summit. Enjoy the panoramic vistas from the top, and see if you can pick out Mount Coonowrin's distinctive peak. Check the forecast and turn back at the first sign of bad weather — it's dangerous when wet. Purling Brook Falls is Springbrook's most popular walk, located around 100 kilometres south of Brisbane. Shortly after starting the grade three circuit (four kilometres, two hours), you'll glimpse Gold Coast and Purling Brook Valley from the top of the cliffs. The vegetation gradually changes to cool rainforest before you branch off at the base of the falls for Warringa Pool — which will add another (optional) two kilometres to your trek. Walk through the piccabeen palms to this emerald oasis in the heart of the rainforest. After you've had a dip, head back to the base of the falls and continue the circuit as you gently wind back up to drier eucalypt forests. Unless you need the extra steps, be sure to take the circuit clockwise to save yourself from walking up 265 stairs. Waterfalls galore await you on the Twin Falls Circuit, which you'll find 100 kilometres south of Brisbane. The Twin Falls are so close to the Purling Brook Falls (above) that you should consider doubling up for the ultimate one-day adventure. The grade three track (four kilometres return, two hours) passes Tamarramai Falls before snaking behind Twin Falls, which feeds into a delightful watering hole. It then continues past Tallanbana and Blackfellow falls. One of the highlights of this walk — aside from the endless waterfalls — is the sheer variety of vegetation you hike through, including several types of rainforest as well as montane heaths and open brush box forest. Head north from Brisbane for just over 100 kilometres, deep into the Blackall Range, for a day hike that combines top-notch swimming holes with a picturesque waterfall. From the Kondalilli Falls car park, continue down to the bridge and turn right. This class three track (four kilometres, two hours) passes a rock pool at the top of the falls early on. This is a great walk for summer, when you can whittle away the hours swimming and enjoying the valley views. Continue to the base of Kondalilla Falls — which fittingly means 'rushing water' in the local Aboriginal language — before making your way back. 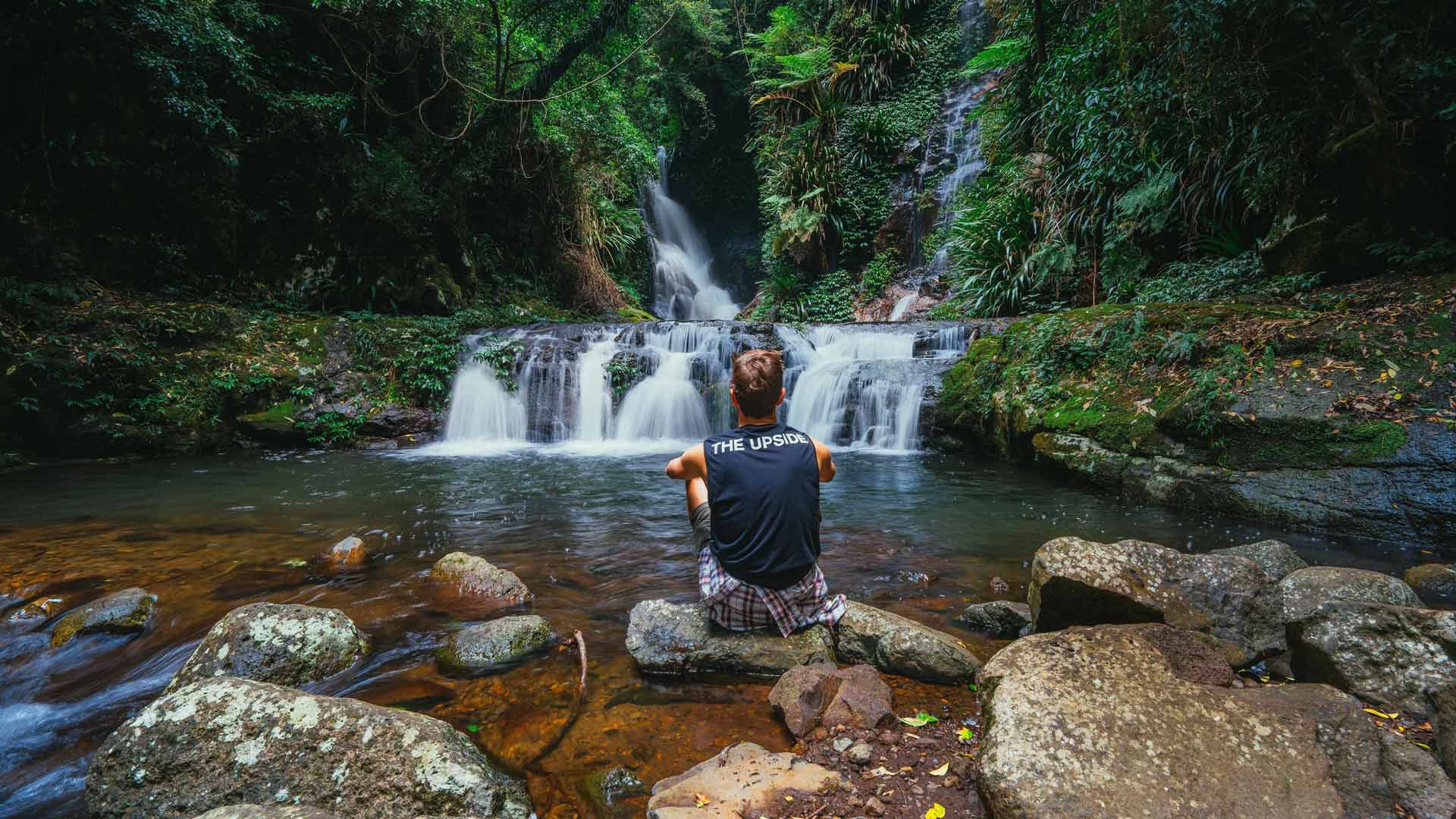 Daves Creek Circuit (12 kilometres, four hours) is one of the most botanically diverse tracks in Lamington, located 100 kilometres south of Brisbane. This class four track gets you the most plant bang for your buck per kilometre. As you hike, notice how the vegetation around you rapidly changes — you'll walk through every kind of rainforest, as well as eucalypt and heathland. The track is scattered with lilies, orchids, banksia, wattles, ferns and casuarina, plus a bloom of wildflowers in late winter and spring. There are also two grand lookouts: the first over Woggunba Valley, and the second over Numinbah Valley. See if you can hear the distinctive sounds of the Albert's lyrebird as you hike. Morans Falls is a popular day hike through sweeping valley vistas from the top of Morans Falls and beyond. The site is also located in Lamington, 110 kilometres south of Brisbane, in the Green Mountains section. This is a family-friendly grade four track (4.4 kilometres, 1.5 hours) through the largest undisturbed area of subtropical rainforest in southeast Queensland. The valley views from the top of Morans Falls are a delight, but the views of the falls themselves from further down are a close second. Lamington also has an epic multi-day hike, if you'd like to stretch it out across a couple of days. Mount Cordeaux juts out of the perimeter of the Scenic Rim, a 116 kilometre drive southwest of Brisbane. The one-day walk up to the peak of Mount Cordeaux and out to Bare Rock (around 12 kilometres combined) is the best way to admire the Scenic Rim's crescent of impressive ranges and valleys. First, you'll step back in time to walk through the same ancient rainforests that covered the Gondwanan supercontinent more than 180 million years ago. After that, you'll soak up the expansive views of the mountainous ranges from the Mount Cordeaux Summit and then from Bare Rock, which is truly one of the best views in southeast Queensland. In spring, giant spear lilies bloom, with their five-metre long flowering stalks adorned with red flowers. 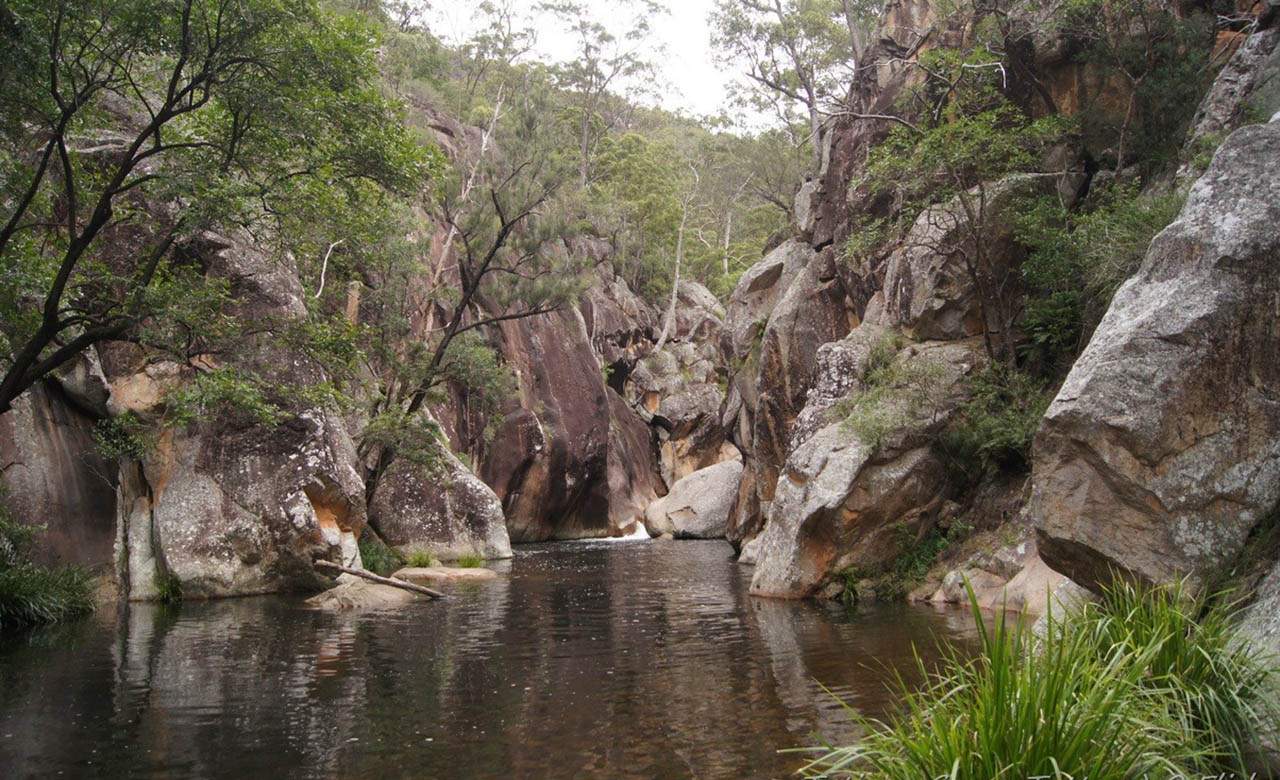 Mount Barney is the pinnacle of bushwalking in southeast Queensland, located 130 kilometres southwest of Brisbane. The arduous summit hike is for hardcore hikers, but the range of different walks on offer means that Barney should be on everyone's list. The Lower Portals hike (7.4 kilometres, three hours) is a great way to experience this incredible mountain without all that pesky elevation. The track ends at a swimming hole within a rocky gorge, so be sure to bring your swimmers along if the weather's right. See if you can spot the delightful orange starbursts of the extremely rare Mount Barney bush pea on your walk. This class four track has a tendency to heat up, so head out between April and September. Girraween is a spectacular and remote national park, with unusual granite boulders speckled across its landscape. Its name is just as beautiful — it means "place of flowers" in the local Aboriginal language. While it's located just over three hours' drive (260 kilometres) southwest of Brisbane, the walk to Sphinx and Turtle Rock (7.4 kilometres, four hours) is well worth it. The Sphinx is so named because of its massive boulder, which seems to balance impossibly on another. Then there's the gargantuan granite 'turtle shell' rock to see. Come in spring for seas of yellow wattle.