Jump in your car (or on the train) and head to these coastal swimming holes free from rips and sharks.

While Sydney's beaches are hard to beat, the coasts, both north and south of the city, are home to some breathtaking stretches of ocean. And, if you're looking for something other than your usual beach outing, those coasts are also home to heaps of ocean pools. Sheltered or battered by waves, lap pools or true swimming holes, hidden behind cliffs or right on the beach — our coast has it all. Here's our list of the best of 'em, all of which are free to the public and open all year round. Located about a five-hour drive south of Sydney, The Blue Pool at Bermagui will require you to book an overnight stay — but the road trip will be well worth it. This Sapphire Coast gem is set on a sheer cliff that juts out into the ocean and is the ideal spot to watch the sunset in warmer months. It's located just off Pacific Drive and is equipped with recently built showers, toilets and changing rooms. The rock pool often boasts impossibly clear blue waters and is a favourite among snorkellers. Apart from the concrete and railed steps down to the pool, this bath really feels like it's part of the ocean. From September–November, you'll find the space teaming with whale watchers, who sit along the viewing platform for unbridled coastal views, too. Created in the 1920s, the Coalcliff Rock Pool is tucked away on the coast of Leeder Park, set on the southern tip of Coalcliff Beach. The pool is a go-to for local swimmers all year round, but you can expect it to be a little busier (and warmer) during the summer months. The secluded swimming spot also offers panoramic views across the South Pacific. Up at Leeder Park, there are picnic areas, walking tracks, shower facilities and free parking, too. Or, if you're keen to traverse by foot, you can also walk along the incredibly idyllic Sea Cliff Bridge. Then, jump in your car — or on the train, there are stations at both Coalcliff and Coledale — and head to the Coledale Rock Pool. The two-in-one trek is easily doable as a day trip from Sydney. The vast rocky landscape down at Coledale Beach gives the spot a real 'edge of the word' vibe — so much so that its deeply carved rock pool just looks like part of the landscape at high tide. A closer look toward the beach's southern end reveals a large lap pool that runs off directly into the expansive ocean beyond. The pool offers both a shallow and deep end, which means it's ideal whether you're looking for a casual place to cool off or are a serious swimmer wanting to do laps. It's also a quick 1.5-hour train from Sydney and within walking distance of the station, with changing rooms and showers available at the top before you head down to the rocks. 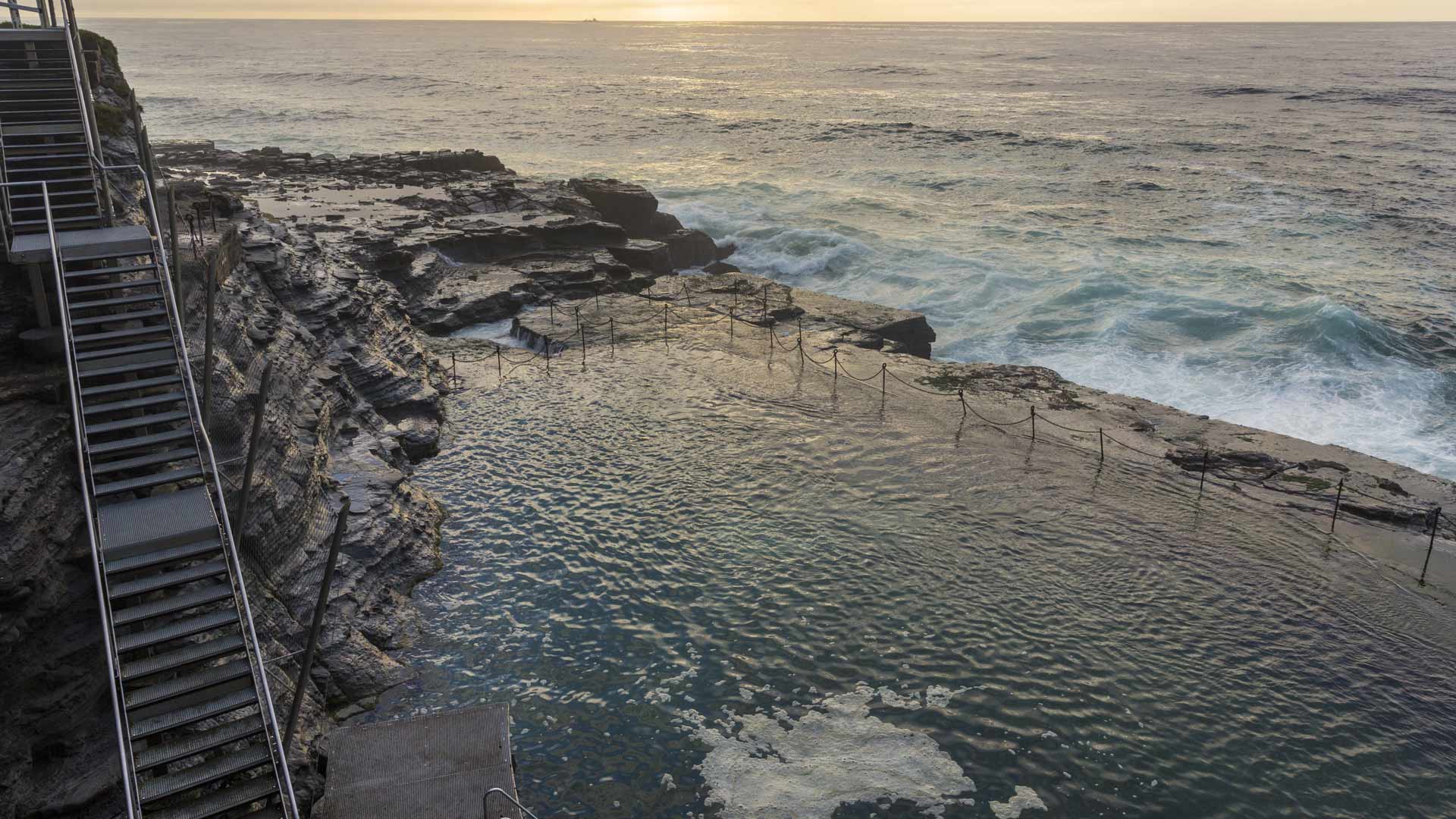 Newcastle's Commandant's Baths is one of NSW's oldest human-made ocean baths. The heritage-listed ocean pool was cut into the sandstone rocks by convict labour in 1819 — yes, a whopping 200 years ago — and is now called the Bogey Hole, which comes from the Dharawal word meaning 'to bathe'. The 1.5-metre deep pool is set within a base of cliffs near Shepherds Hill and can get seriously rocked by waves spilling over from the ocean, so beware if you're expecting a more relaxed swim. But, for those looking for a little adventure, it's a must see — and it's worth the drive up to Newcastle, which is home to many great swimming spots (we'll get to the others in a second). The Central Coast is home to its own heritage-listed ocean pool dubbed The Entrance, and it includes a 50-metre, seven lane Olympic-sized lap pool — plus a separate 22-metre pool for more casual swimming and a wading pool to boot. Constructed in the mid-1950s along Ocean Parade, it replaced an earlier iteration called Roberts' Pool, with the aim to bring the baths closer to the Entrance Beach shoreline. As with the others, it's free of charge and open to the public year round. It also boasts heaps of nearby amenities and a kiosk for post-swim bites. The Entrance Ocean Baths is the only ocean pools in the Central Coast region, too. 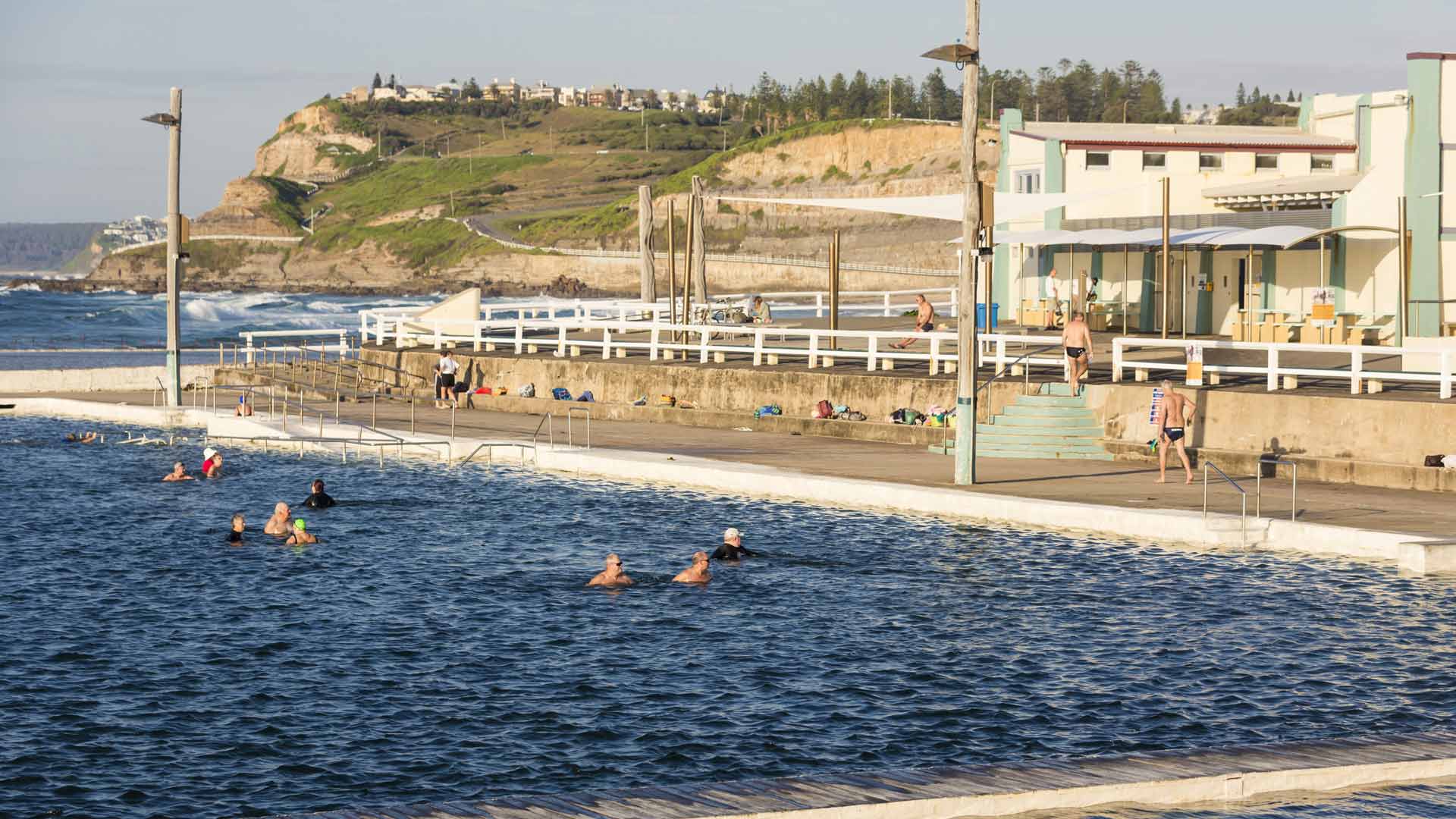 The Newcastle Ocean Baths particularly stands out because of its art deco-style pavilion and striking water's-edge setting, sat high above the rocky coast. It's arguably the most popular ocean lap pool in the area, but it's big so you (hopefully) won't be kicked in the head with a flipper while swimming around. It's also situated just next to the Merewether Baths, and both pools are open all year round. Built back in 1922 and 1935, the baths are both heading towards the big 1-0-0 and the City of Newcastle is seeking expressions of interest to redevelop both pavilions, so you may see some major changes to the pools down the track. Located at the southern end of Whale Beach, this 25-metre-long rock pool fills at high tide. It's the less crowded southern cousin to Palm Beach, so you'll have much more space for splashing about. Its stone walls give the pool a green tint typical of chlorinated swimming pools, but rest assured it's all natural ocean water here. A swim at this rock pool also offers unrestricted views out across the South Pacific. Once you've finished your swim, head to the barbecue area for lunch. Then be sure to take the short 15-minute stroll to the Careel Head Lookout for more stunning views before you head off.

Published on February 22, 2021 by Marissa Ciampi